A team of volunteers from London Ambulance Service (LAS) has been shortlisted in the ‘999 Hero’ category of The Sun’s Who Cares Wins awards, an accolade honouring the efforts of those who’ve made a difference in the NHS.

The nomination celebrates the humanitarian mission that a group of 26 LAS volunteers completed in April 2022, when both paramedics and non-clinical staff drove to the Polish-Ukrainian border to deliver 10 refurbished ambulances and medical equipment to support the people of Ukraine. 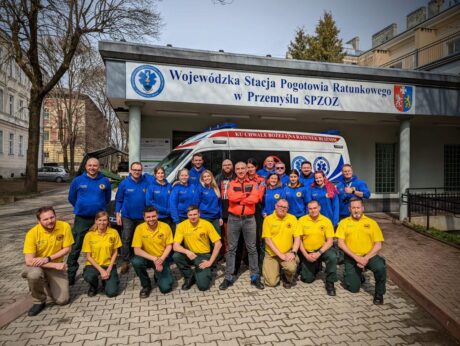 The convoy of ambulances arrived in Przemyśl, Poland, after three days on the road, where the vehicles were handed over to the local paramedics and then driven across the nearby Ukrainian border to Lviv.

The decommissioned ambulances were no longer being used by LAS frontline crews so mechanics, led by Fleet Technician Nathan Estall, restored the vehicles.

Within days of the conflict starting, the team of LAS volunteers filled the ambulances with pallets of equipment donated from various hospital trusts – from bandages and syringes to ventilators – and drove them across Europe.

LAS paramedic Eva Bartoskova, one of the architects of the humanitarian mission, said: “I’m Czech and the war in Ukraine feels close to home. So I did the only thing I knew how to do and began to raise money with a JustGiving page. I was overwhelmed by the reaction. We had amazing support from London Ambulance Service and the branch of UNISON – everyone joined together. We got a small group of LAS staff and volunteers together who gave up their time and it just grew.”

Michael Pearce, an LAS incident and delivery manager, who led the convoy, said: “Our Chief Executive Daniel Elkeles and colleague Eva Bartoskova had the idea of doing something and we were there within two weeks.” 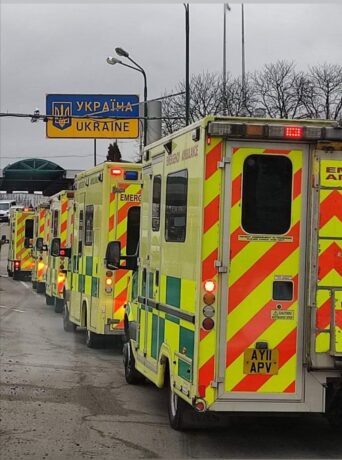 Rafal Kijanka, director of the provincial ambulance service in Przemyśl, said: “When we saw the ambulances arrive and the volunteers’ smiling faces, they gave us motivation and hope to help the Ukrainian people. It was very emotional, people from three countries – the UK, Poland and Ukraine – building a team together to help each other. We have seen the worst of mankind, but also the best. The people in Lviv were really grateful and happy. They could feel they were not alone and they really needed the medical supplies.”

The LAS team were nominated for the Who Cares Wins award by Caroline Pidgeon AM, Liberal Democrats Leader in the London Assembly. She said: “We have all seen the horrific images from the war in the Ukraine and I am very proud to have nominated the London Ambulance Service for this amazing gesture. I cannot think of a team of more deserving recipients.”

After delivering the ambulances, six members of the LAS team remained in Poland to help out at a refugee centre.

Eva, who was one of those who stayed on, said: “At the refugee camps, I felt like I had a real glimpse of the war. Women and children were in such distress. They were without some of the most basic things. What we brought them, and bought while we were there, was a drop in the ocean. It would only last a few days as people just kept arriving. It was reassuring they had reached safety. I wish we could have stayed longer.”

LAS Chief Executive Daniel Elkeles thanked everyone involved in the mission, including the convoy of 26 volunteers, the 300 staff who initially offered to take part, and the many LAS staff and volunteers who also helped behind the scenes.

He said: “We were all touched by the suffering of the people of Ukraine and decided to engage in a communal effort to make a small, but real difference. It’s great that this has been recognised and the dedication of our teams – making an impact beyond the borders of our city – has been honoured with such an important award nomination.”

Winners of The Sun’s Who Cares Wins awards will be announced at a ceremony broadcast on Channel 4 and All 4 on November 27 at 6.30pm.