A man who beat the odds to survive his second cardiac arrest has been reunited with the London Ambulance Service teams who helped to save his life. 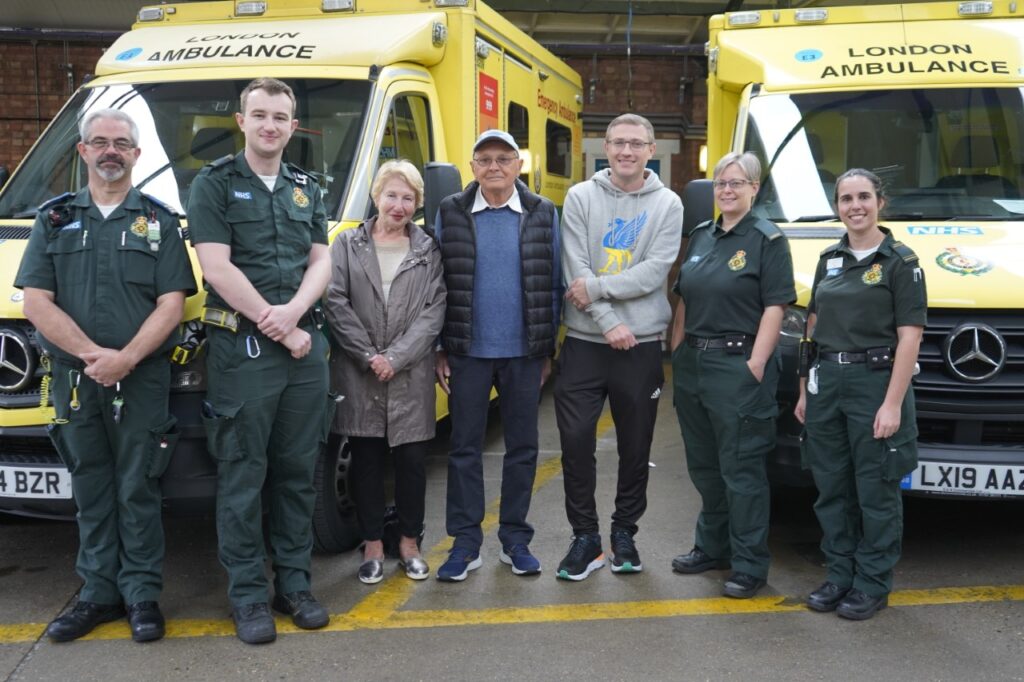 Val Dyadyuk, 75, was visiting his son in north London when he stopped breathing early one morning in May.

Val’s wife Nina screamed out for her son when she could not rouse her husband.

Son Oleg Khomenko immediately dialled 999. Call handler Nyota Ndeke dispatched an ambulance to the home and began instructing Oleg on how to give life-saving chest compressions.

Oleg said: “I remember so clearly the help on the phone, I had incredible instructions from the call handler, clear and calming and reassuring.

“She guided me on the strength of the chest compressions and counting with me when I was getting tired.”

An ambulance crew and two paramedics in fast response cars were sent to the home. The crews managed to resuscitate Val before taking him to a hospital with a specialist heart unit. He spent five weeks in hospital.

Now fully recovered, Val has met the ambulance crews who treated him that morning back in May, so he could thank them in person. Val and Nina are originally from Ukraine but now live in Australia, where they have since returned.

Oleg added: “We could not have had my dad back without the wonderful ambulance people that came to save him for us.

“They were incredibly professional, helpful, understanding and most of all human in a time that was so difficult for myself and my family. We are forever grateful.”

The ambulance crews credit Oleg with helping his dad beat the odds.

Paramedic Kate Gaustad said: “The fact that he woke up to his mum screaming and leapt into action with such effective chest compressions meant he saved his dad’s life.

“We couldn’t have done our job without Oleg’s actions. Meeting Val made me proud, to know his family have him back, to see him walking, talking, living life – he represents what the ambulance service is there for.”

Paramedic Pilar Galardi said: “Val looked so well and so happy, it meant so much to meet him and his family.

“Not many people survive a cardiac arrest and it can only happen if someone starts chest compressions while waiting for an ambulance.”

Andy Snowball, emergency medical technician, said: “We rarely get to meet a patient after they have arrived at hospital so it is very rewarding to meet Val and his family after him making such a great recovery.

“We are trained to save lives but to actually know find out more about the person whose life we’ve saved makes all the difference.”

Paramedic Ben Holyroyd said: “It was a privilege and honour to meet Val. It’s just so amazing to be part of the joy and happiness that the family have.

“I am proud of what we did but on that day Oleg was part of our team – hopefully their story will inspire others to learn life-saving skills.”