One last ride out and a heartfelt farewell for motorbike paramedic

To commemorate the life of Mark Pell – a popular Paramedic in the Motorcycle Response Unit at London Ambulance Service who sadly died in April – a convoy of his colleagues rode alongside the funeral procession this afternoon (Tuesday 17 May), escorting Mark and his loved ones during his final journey.

Mark sadly died on Wednesday 13 April, having been admitted to hospital following a road traffic accident whilst on a training course in North Wales. Having joined the Service as a Qualified Ambulance Person 28 years ago, and spending most of his career at Whipps Cross and Buckhurst Hill ambulance stations and, latterly, with the Motorcycle Response Unit, Mark was a well-known and well-loved member of the ‘green family’ – a fact that was made even more evident during his funeral earlier today.

The funeral procession, which travelled 25 miles from Chipping Ongar to Ilford, was accompanied by a police escort, 29 of Mark’s colleagues from the Motorcycle Response Unit, an ambulance and a fast response car. The procession passed by Whipps Cross Hospital to allow NHS staff who knew Mark to line the route, hold a one minute’s silence and bid Mark a heartfelt farewell. As the procession arrived at the crematorium, they were met with a guard of honour, featuring the Service’s ceremonial unit and a trumpet salute. 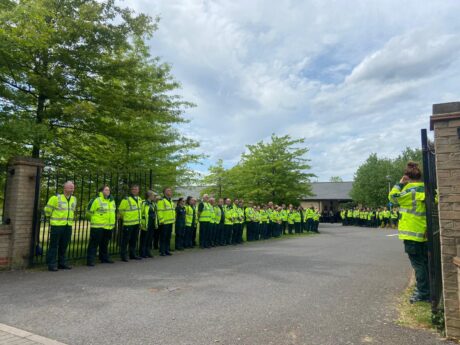 Mark was 51 years old and joined the London Ambulance Service in August 1994.

Chief Executive Daniel Elkeles, said: “Mark is greatly missed by his colleagues at London Ambulance Service. He was a popular member of our team and an asset to the Service as a whole – he will be remembered for his dedication to patient care and the unwavering support he offered his colleagues.

“I would like to say thank you to Mark’s family and loved ones for inviting us to join them today, and for allowing our Motorcycle Response Unit to pay tribute to Mark in the most fitting way possible, with one last ride out. I understand this is an incredibly difficult day for those who were close to Mark, and my thoughts and sympathies remain with his family, friends and colleagues.” 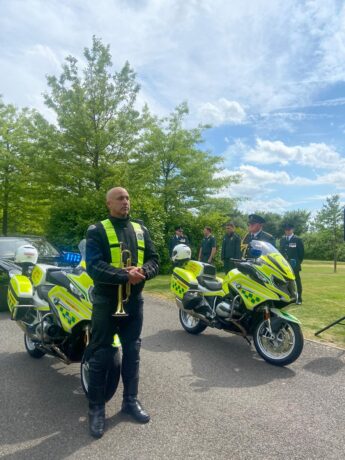 Director of Ambulance Services, Darren Farmer, said: “It was an honour to be here today and to pay our respects to Mark during this beautiful ceremony. I think the turnout goes to show just how well-loved Mark is, although I know there are many more people working at our headquarters, local ambulance stations and in the Motorcycle Response Unit who would have loved to have been here but needed to keep our services running smoothly. Thank you to everyone who has helped make today such a touching farewell to our colleague, Mark Pell.

“We would ask that people continue to respect the privacy of Mark’s friends, family and loved ones at this time.”