A London Ambulance Service paramedic has been awarded a Queen’s Ambulance Medal recognising 22 years of devoted service to Londoners in need. 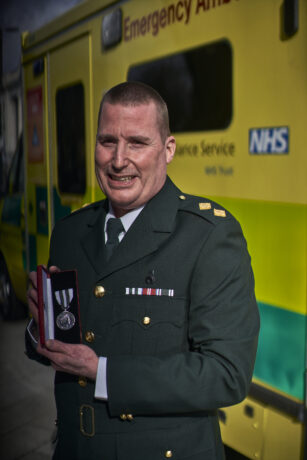 On Tuesday (22 February) Jason Morris, a Clinical Team Manager based at Sutton ambulance station, attended the investiture at Windsor Castle to collect his medal from HRH Princess Anne.

The prestigious Queen’s Ambulance Medal is a rare achievement, and awarded to those who have shown outstanding ability, merit and conduct in their role.

Chief Executive of London Ambulance Service, Daniel Elkeles, said: “It is wonderful Jason has been recognised in this way.

Ever since Jason was a child he has always wanted to help others.

Growing up in New Zealand he took part in rescue training for the civil defence, and at aged 19 he moved to England and became a St John Ambulance volunteer. This was where he met a member of the London Ambulance Service who encouraged him to pursue a career as a paramedic.

More than two decades later, Jason is still helping others and has dedicated his career in doing so.

Jason has championed many initiatives in the ambulance service, including the development of a ‘Red Bag’ scheme for care home residents in Sutton in south west London. The initiative consists of a pre-packed bag containing a list of medical and personal information, which can be given to ambulance crews and hospital staff so clinicians have all the information needed to treat the patient. It has helped reduce the amount of unnecessary time patients have had to stay in hospital and, due to its success, in 2018 it was rolled out nationally.

Since 2009, Jason has also worked with London’s Air Ambulance and is currently one of its longest serving flight paramedics. He takes a leading role in training and developing the team of Helicopter Emergency Medical Service (HEMS) doctors and paramedics.

He has also spearheaded improvements in London Ambulance Service’s 999 and 111 control rooms by harnessing new technology.

This includes introducing GoodSAM Instant-on-Scene, this technology allows clinicians the ability to remotely access a caller’s smartphone camera to quickly understand the patient’s injuries and needs, helping to decide what resources or treatment is needed and provide critical lifesaving advice before the arrival of ambulance crews.

Since being introduced in 2019, it has been used over 80,000 times and helped save countless lives.

Most recently, and during the COVID-19 response, Jason lived out of a hotel, away from his family and devoted hours protecting London Ambulance Service staff, volunteers and patients from the virus, by ensuring medics had the necessary personal protective equipment (PPE) and found solutions when challenges arose.

On receiving his Queen’s Ambulance Medal, Jason said: “It’s such an honour to be recognised in this way, and it really has been the highlight of my career.

“To be nominated by my colleagues makes receiving this award even more special. From my point of view I’m just part of the team and it wouldn’t be possible for me to do my job every day without the support of everyone else around me.

“This is my dream job. I love what I do and I wouldn’t ever want to do anything else.”