Gary Edwards, one of the first paramedics on scene of the London Bridge terror attack in 2017, has been awarded a London Ambulance Service Chief Commendation award for his exceptional courage and bravery. 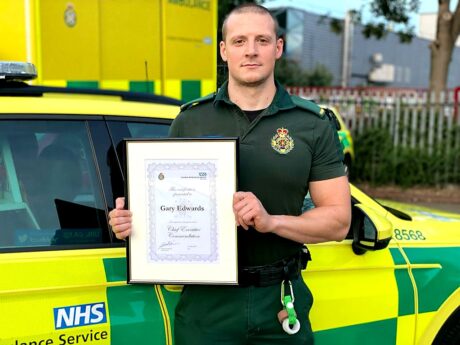 On 3 June 2017, Gary responded to a 999 call to what was originally thought to be a road traffic collision on London Bridge. After arriving at the scene in six minutes, he quickly realised it was something far more sinister, a terror attack, which tragically claimed the lives of eight innocent people and injured many more.

Gary, a Tactical Response Unit (TRU) paramedic who is specially trained to respond to terrorist incidents, worked on immediately treating the most seriously injured and evacuating many others to safety, away from the Bridge and from the danger.

At the time he didn’t know if the gun shots he could hear were coming from the assailants or the police, but he treated injured people at the scene while they were being fired.

Nick Osborne, TRU Operations Officer, who nominated Gary for the award said: “Gary and others made countless journeys across the bridge that night, evacuating those casualties unable to walk to a safer area.

“I have no doubt that Gary’s initial quick actions, and subsequent tireless work with others at the scene, saved many lives that night, and was one of the reasons that the 48 members of the public conveyed to hospital survived.”

The Chief Commendation Award, awarded to those who have shown exceptional courage and bravery, was presented to Gary by former Chief Executive of London Ambulance Service, Garrett Emmerson upon his departure from the Service.

Garrett said: “Gary is a real credit to the Service and his actions that night personifies the incredible professionalism and speed of our response. It is wonderful to be able to recognise him in this way.”

On accepting the award, Gary said: “I’m so honoured to receive this award and to be recognised in this way. It was an extremely difficult and challenging incident to attend.

“My thoughts are with everyone affected by the incident, including colleagues and members of the public who were there to see it unfold.”