As the UK began to emerge from lockdown, the much longed-for haircut was one of the most anticipated moments for many.

But for Team LAS medic Tony Keegan, it meant more than just a dramatic new look.

The 51-year-old made the difficult decision to have a trim which – for the first time – revealed his hearing implants.

He said: “Like many people, I didn’t have a haircut for the past four months but every time I have had a haircut in the past, I’ve kept it long enough to cover the implants – mostly out of embarrassment.”

Tony was born with perforated ear drums which meant recurring ear infections and eventually led to him developing a dangerous skin condition in his ear when he was in his early 30s.

He needed emergency surgery which saved his life but left him with almost total hearing loss. 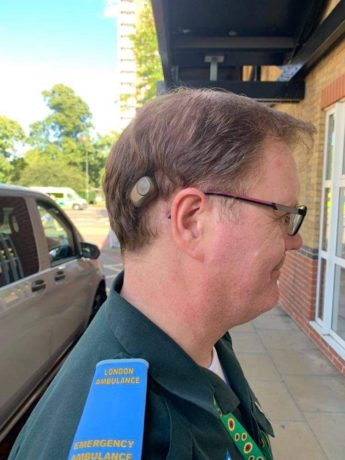 “I have had a total of 22 operations in my life – the first when I was just a child. But becoming deaf as an adult was very difficult to adjust to.

“I felt so isolated and frustrated. I felt like I had lost everything. I was completely alone and I couldn’t hear anything.

“I remember my first trip to the supermarket and someone pushed me because I hadn’t heard them.”

Tony was eventually fitted with implants which consist of a small device under the skin and a bigger piece which is visible and works like a microphone to pick up sounds.

Tony refers to deafness as a hidden disability with the implants and with his longer hair, some of his colleagues did not even know he was deaf. That’s despite him becoming a very familiar figure within London Ambulance Service since the COVID-19 pandemic hit the capital in March.

He works on one of the Service’s five ‘tea trucks’ which provide refreshments to busy crews who were missing breaks while working flat out to respond to the virus.

Tony, who was previously working as emergency ambulance crew out of Bromley Ambulance Station, said: “This haircut is a huge step for me but I know I will get over my embarrassment and everyone will see I’m the same person – still friendly, still chatty, still helpful.”

Tony only started working for London Ambulance Service a few years ago but had been a volunteer Community First Responder before that. He is fulfilling an ambition he has held since he was a small boy.

He said: “The caring side of the role has always appealed to me but with my issues I have felt vulnerable. But now I see this is my chance to educate people. I don’t need to hide my disability.”