London Ambulance Service is preparing for one of its busiest nights of the year with an influx of calls as revellers celebrate the start of the new decade. 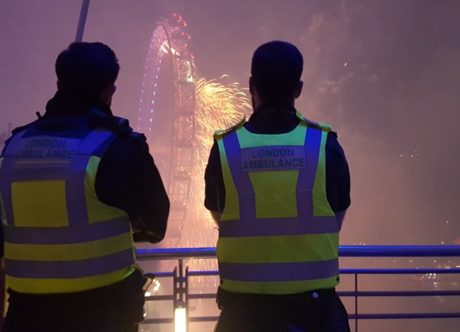 This New Year’s Eve, the Service is expecting to take more than 7,000 emergency calls – around 2,000 more than the daily average for London in 2018. Last year, during the peak time between 2am and 3am on New Year’s Day, more than 400 calls were received – almost double the usual hourly rate.

This December has been a particularly busy month due to Christmas festivities and early arrival of winter illnesses like flu. Plans are in place to put more ambulances on the road and staff in control rooms. A number of staff will be deployed on foot at the New Year’s Eve music and fireworks event around the River Thames so they can easily respond to calls within the crowded area.

In addition to extensive preparations, Londoners are being urged to help reduce pressure where possible so that the most critically injured or ill people can be prioritised.

Chief Operating Officer Khadir Meer, said: “New Year’s Eve is traditionally very busy for us and this year is likely to be no exception given the level of demand we have seen so far this month.

“It’s great fun seeing in the New Year in the capital, but Londoners can help us to make sure we get to the most critically ill patients quickly.

“Many calls over the past few weeks did not actually need an emergency response and were treated by self-care. Please remember that 999 is for emergencies. If it’s not an emergency, but you need medical help or want reassurance, go direct to NHS 111 online.”

While demand for ambulances is generally high on New Year’s Eve, London Ambulance Service also sees numerous incidents where heavy drinking has played a part in injuries. In the 12 hours from 6pm on New Year’s Eve 2018, it responded to just under 400 alcohol-related incidents. In the busiest hour between 1am and 2am it took more than one call every minute where alcohol was a factor.

To counter this, London Ambulance Service is once again supporting the City of London’s ‘Eat, Pace and Plan’ campaign to encourage people to take steps to ensure they do not need its help.

Mr Meer said: “It’s a busy time for alcohol-related incidents but they are entirely avoidable. Unfortunately, if people are unconscious through drink, we have to prioritise that call but we don’t know until we get there whether it’s a genuine life-threatening emergency or not.

“We are simply asking people look after themselves. Eat something before you go out. Pace yourself by alternating with soft drinks or water so you reduce how much alcohol you are consuming. Finally, have a plan to get home so you don’t get stranded and you get home safely.”

Mr Meer also paid tribute to staff for their work over the year and to those who are working over the festive period.

“For those working over Christmas and NYE, I would like to offer special thanks for giving up time with family and friends to keep Londoners safe and healthy. It is greatly appreciated.”