The bicycle, and the kit cycle medics carried at the turn of the millennium, is on display in a newly opened and eagerly anticipated lifetime exhibition at the central London museum – donated by the founder of the CRU, Tom Lynch MBE.

The Medicine: The Wellcome Galleries at the Science Museum in London opened on 16 November. It’s the biggest exhibition of its kind in the world, at 3,000 square metres.

Medic Tom – a BMX Racing Champion – first proposed a dedicated bicycle response team in 1998 – getting the go-ahead to launch a team in 2000.

The bike he used as a single-medic unit operating a trial in the West End is on display and a second, spare bicycle Tom used is at the London Ambulance Service Historic Collection.

After Tom’s 2000 trial responding in the West End proved a success, he started to expand the unit across the capital.

In addition to the bicycle in the exhibit is the kit and medical equipment Tom would carry when responding to patients. This includes a defibrillator, oxygen and Tom’s BMX-style helmet.

“It was very special for me to see the display for the first time – in this amazing new exhibition and among some wonderful pieces of medical innovation.

“Our Cycle Response Unit has come a long way since I rode this bicycle around the West End – we estimate our riders have since cycled an equivalent distance of circling the planet 70 times!

“As we approach 20 years since the formation of the unit, it’s wonderful to have this integral display of our history showcasing how we’ve developed in the Science Museum for decades to come. I am so proud to represent the Service in this way.”

Nowadays cycle medics still respond in the busy centre of the capital, including the West End and the City of London. The unit also has cycle responders in train stations and shopping centres in Stratford, Kings Cross and St Pancras and there is also a team-based at Heathrow Airport and in Kingston and Richmond.

In 2007 Tom Lynch was listed in the Queen’s New Year’s Honours List and appointed as a Member of the Order of the British Empire (MBE) for services to cycling, including his BMX career as a champion racer and coach, which was presented by HRH The Prince of Wales.

Paramedic Saul Gaunt also features in an exhibition in the Medicine Galleries in a film – talking about his experiences as a medic in the capital and how the care we provide has changed over time.

Cycle paramedics attend all kinds of incidents – from those where they might be able to reach patients more quickly than ambulances to give care on scene and cancel the ambulance – to the most serious calls, such as cardiac arrests. Indeed, in the year 2018-19 a cycle paramedic was present at 57 cardiac arrests and, in more than half of these, return of spontaneous circulation (ROSC) was achieved – the vital first step of surviving a cardiac arrest. 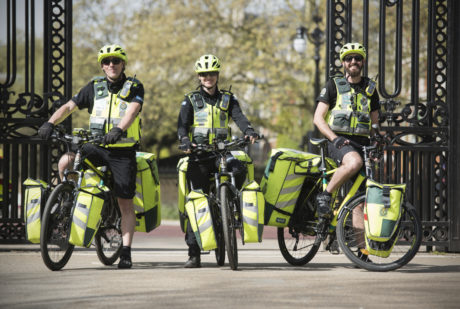 The bicycles carry very similar equipment to that found on the ambulances, fast response cars and motorcycle response units, but in smaller quantities. The unit attends approximately 30,000 calls a year and is on scene in an average of six minutes.

Cycle medics do shifts of around 10-12 hours and can clock up around 20 miles in a single shift!

For more information on the Medicine Galleries please click here.