A man whose heart stopped nine times has enjoyed a tearful reunion with the volunteer responders who saved his life. 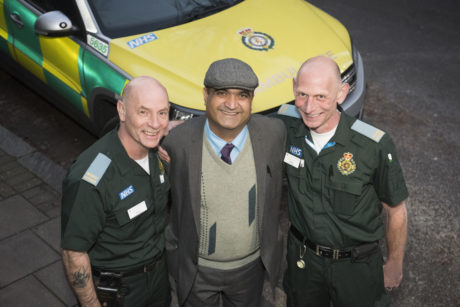 Amin Akbar, 40, from Southall was working at DHL in Heathrow when he began feeling chest pains in June of last year.

“I told my supervisor and he told me to go to the break room to chill out for a bit but I began to feel worse so he called for the ambulance,” said Amin.

On a usual day Peter, from Chessington, teaches people to drive lorries, buses and coaches while Garry, from Isleworth, works as a manager at a carpentry and joinery firm. But in their spare time they are volunteer Emergency Responders, specially trained by London Ambulance Service in life saving skills who respond to emergencies with almost identical vehicles and similar lifesaving equipment as regular crews.

Amin: “I was waiting for two angels and they came; it is because of Garry and Peter them that I am here today. The first thing I remember after waking up is a huge pressure on my chest and I heard Garry say ‘good man, you’re still alive’.

“At the hospital the doctor told me I had died nine times. He said I had to give my credit to the first people that arrived to help me because they didn’t give up.”

Peter said he joined the Emergency Responder scheme after the tragic death of his son eight years ago.

Peter said: “I was lost for the first year after that happened. That’s why I started volunteering as an Emergency Responder; I knew I needed to do something to help others. I wanted something worthwhile to come out of what had happened.

“When word got back to us on that same shift that Amin was sitting up in bed and talking it was the biggest buzz we’ve ever had. It has been a very emotional experience meeting Amin. He is such an inspiration in the way he has changed his life around.  It’s outcomes like this that make you look forward to your next shift.”

Amin has now returned to work after six months his colleagues at DHL have hosted a fundraising dinner to donate to the London Ambulance Service Voluntary Responder Group. DHL will match fund the staff members’ contribution to double the amount. 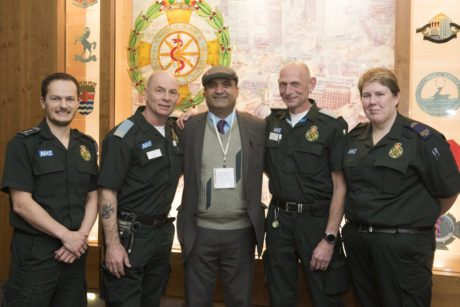 Amin said: “I am perfectly fine now. I have given up smoking, junk food and fizzy drinks. I’m looking after myself. The first thing I did when the doctor allowed me to travel is to take a pilgrimage to the holy cities. It’s something I’ve always wanted to do.”

Garry: “It was almost as if Amin had waited for us to arrive. I feel well trained by the LAS so I feel confident in dealing with something like this.”

Amin has now returned to his job at DHL in an office role.