HRH The Duke of Cambridge was today joined at an event on the River Thames in central London by members of our Service, to launch a new campaign around safety on the tidal River Thames and made a call for the public’s help in reducing injuries and deaths on the river.

London Ambulance Service, The Port of London Authority, The Metropolitan Police, London Fire Brigade, Royal National Lifeboat Institution (RNLI), and Maritime & Coastguard Agency have come together to produce a Drowning Prevention Strategy for the tidal Thames along its 95-mile course, from Teddington to the North Sea.

Prince William met front-line staff from the organisations, including members of our hazardous area response team (HART), involved in the new partnership working to reduce the estimated 700 incidents that occur each year on the river, where people’s lives are at risk.

Annually there are around 30 fatalities, the majority of which are linked to mental health issues. The campaign aims to half the cases of accidental drowning deaths in the UK by 2026.

Our hazardous area response team (HART) are specially trained medics who respond in challenging or hazardous areas to provide life saving care. This includes incidents on the river.

The strategy launched by HRH The Duke of Cambridge also calls on the public to know what to do if they see someone in trouble in water. This includes knowing to call 999 and ask for the coastguard and to never go into the water themselves after a person or a pet. 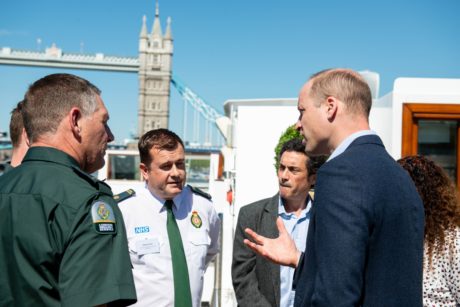 The agencies who produced the new strategy also today signed up to extend the Samaritans “Small Talk Saves Lives” campaign to the river, an initiative originally developed in partnership with Network Rail. This calls for people from all walks of life to play their part in saving lives, by following safety advice and having the confidence to speak to people near the river who might be at risk of injury or death.