Award for six-year-old who saved mum by dialling 999

A six-year-old girl saved her mum’s life by calling 999 just three days after a paramedic visited her school to teach children what to do in a medical emergency. 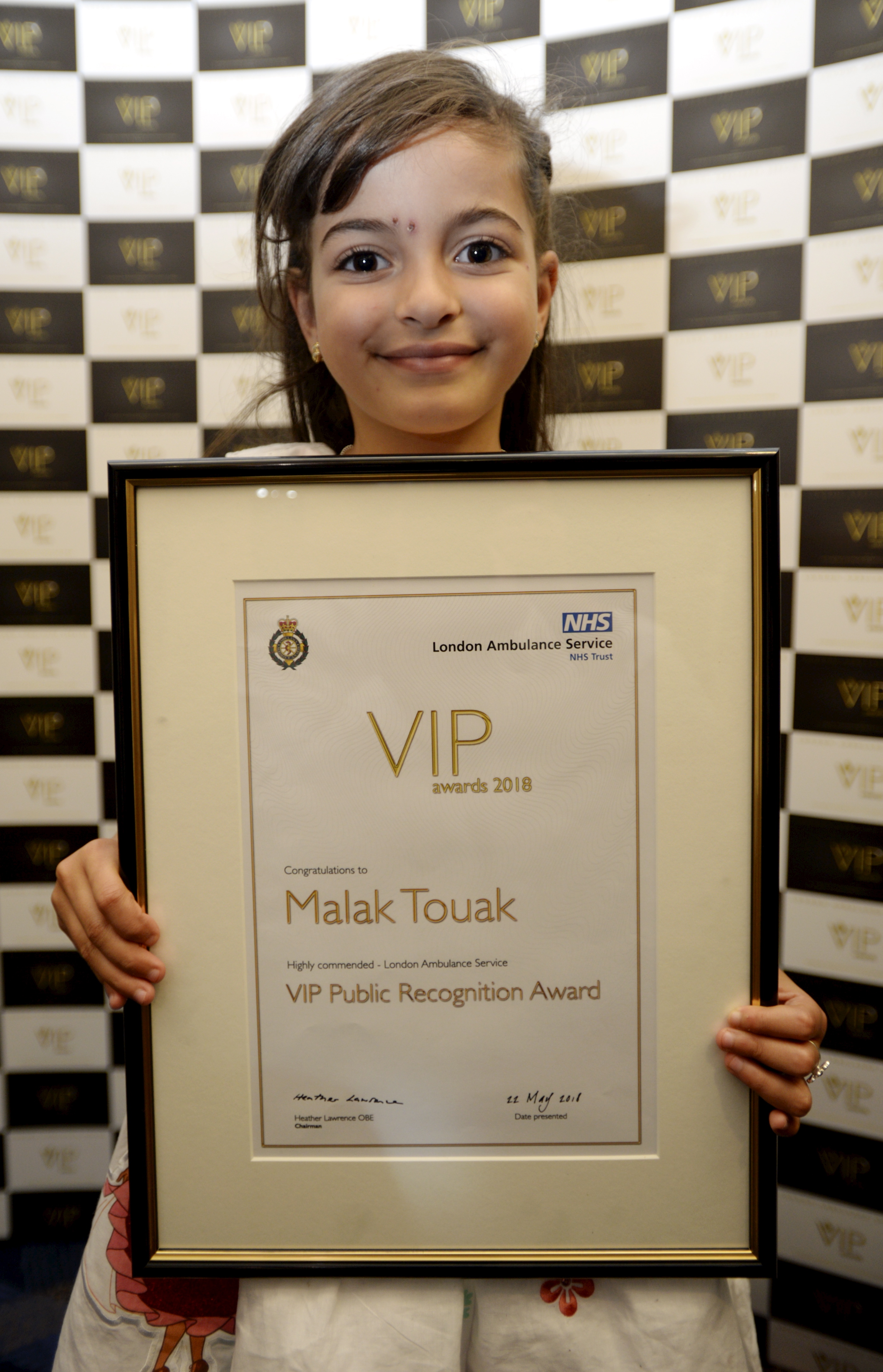 Malak Touak was at home in Pinner when her mum Zahia Halfaoui, 48, fell unconscious.

The schoolgirl has been given a London Ambulance Service public recognition award for her actions and Malak’s 999 call is being released in a bid to encourage parents to show children how to call for help.

Malak remains calm and composed, telling call handler Nichola Cruickshank that her mother is diabetic and she can’t wake her.

Nichola said: “She was absolutely fantastic – her mum had taught her about her condition, so she knew exactly what to do. She remained calm, kept me updated on everything her mum was doing and handled my instructions better than some adults do.”

Malak had already put her mum into the recovery position – after remembering the advice given by paramedic Jarrod Farrell just a few days before at Coteford Infant School.

She also followed the call handler’s instructions to open her mother’s airway and check her breathing.

Malak said: “I was very scared. I just wanted to get some help for my mum.”

When the ambulance arrived at Malak’s home, she asked the crew to show some ID before she let them into her home. 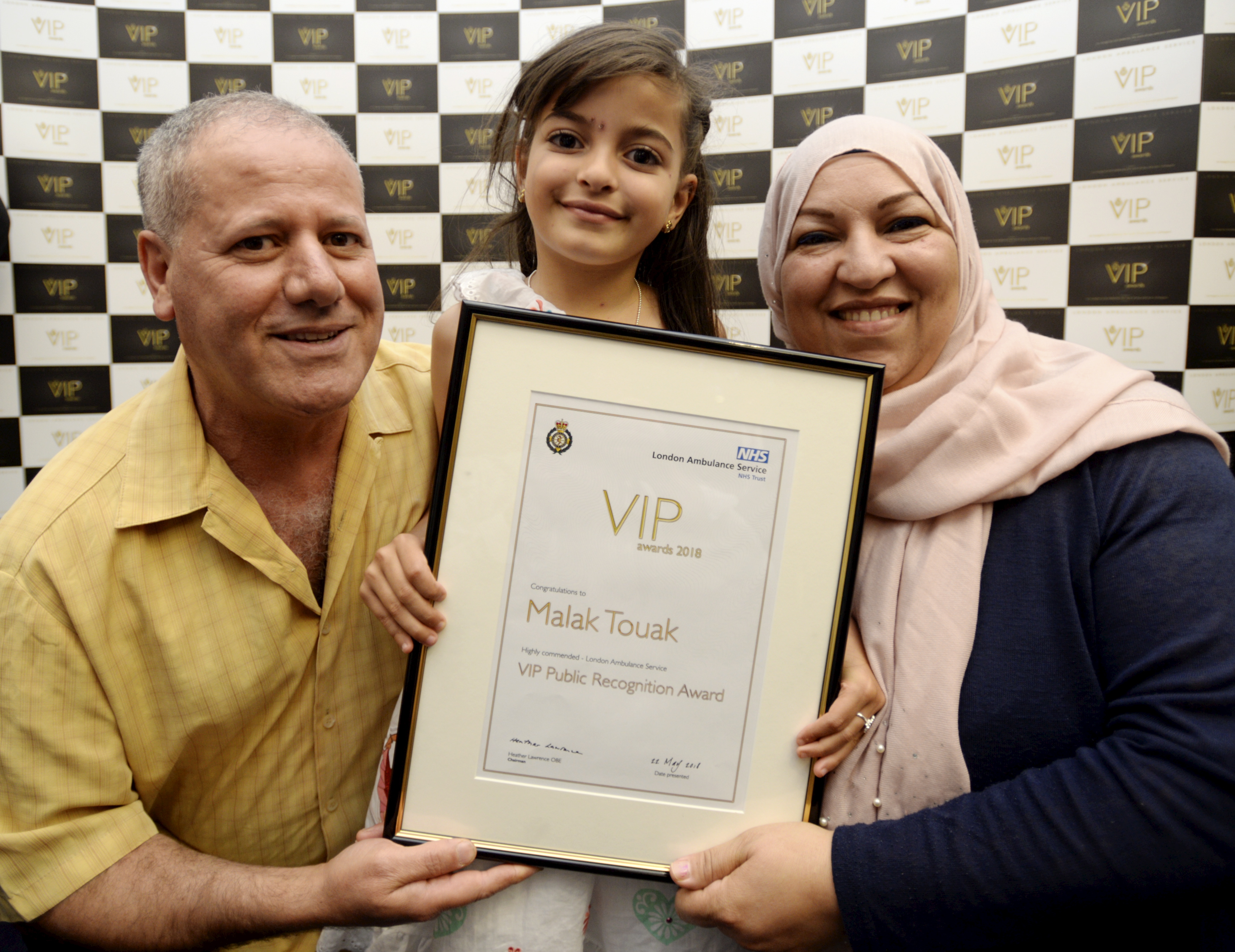 Zahia said: “I am so proud of her. We were alone in the house that day and I had been cleaning and felt a bit unwell. I don’t remember what happened after that.

“What I know is that if Malak hadn’t been there and called for an ambulance, I would have died. I was very very sick.”The ambulance arrived six minutes after the call and paramedics were in time to revive Zahia.

Jarrod, who visits schools on a voluntary basis, said he couldn’t be more proud of the impact his life-saving lesson had on Malak.

He added: “It must have been so frightening for Malak to see her mum so poorly. I’m amazed at how she was able to talk to the call handler so clearly.

“I think hearing this call shows that very young children can be taught what to do in a medical emergency.

“In the meantime, I would ask all parents to show their children how to call 999 – do it today. It could save your life.”

Nichola: “Ok, a little bit. Are they awake?”

Nichola: “Asleep? Ok, if you were to try to wake them, did they wake up?”

Nichola: “Ok, can you tell me what happened?”

Nichola: “Ok, that’s fine – I’m going to get you some help, but stay on the phone with me because I’m going to tell you what to do next. Is there anybody else there with you?”

Nichola: “Just you and your mummy, ok. So are you able to put one hand on your mummy’s forehead and your other hand underneath, and try to tilt her head back?”

Nichola: “Ok, brilliant. And is your mummy breathing? Put your ear next to her mouth and tell me if you can feel or hear her breathing.”

Malak: “I can hear her breathing a little bit.”

Nichola: “You can hear her breathing? Brilliant. You’re doing really well, your mummy’s lucky to have you!”