Children of staff from across our Service have been sent heartfelt letters from the managers of their parents.

The letters have been sent to more than 1000 children thanking them for “sharing” their mum, dad or another family member with us – so they can come to work and be here for people who need us during the COVID-19 pandemic. 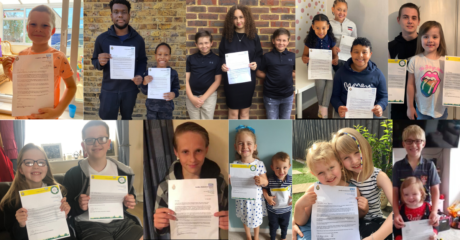 Paramedic Sarah Ablewhite made the difficult decision to live apart from her 14-year-old son in March.

She said: “My son Jack takes a lot of medication, also his dad has some respiratory issues, so I wanted to protect them. But it has been the hardest thing.

“We Facetime a lot but it gets very emotional. We both go through all the emotions – he has been scared about me working but also frustrated and angry he can’t see me.

“Getting the letter just made him so proud and lifted his spirits.”

Ambulance crew Mark Reeve has been living in a hotel since the outbreak of the pandemic to protect his asthmatic six-year-old son.

Mark said: “It has been very hard to be away from him, particularly missing his sixth birthday, but I felt it was more than just my job to be on the frontline; it was something I had to do. London Ambulance Service is also my family.

“I don’t know when I will be reunited with Christopher but it meant so much for him to get a letter. He’s no longer worried, he thinks of me as a superhero, saving lives.”

At the peak of the pandemic, London Ambulance Service was getting as many as 11,000 calls a day. Charlene Letts, emergency ambulance crew and a mum-of-three, suggested the Service send a message out to families at a time when staff were working long and gruelling shifts.

Managers thought it was a great idea and immediately starting sending out the letters – which are personalised for every child.

Charlene said: “The letters are reassuring and made our children feel so special, it said they were heroes and thanked them personally for everything they are doing to help mummy and daddy.

“This made them feel a part of the Service and that they were helping. It has given me great pleasure that something positive can come out of what has been and continues to be challenging times.”

Emergency medical technician Shurelle Elvique said: “Listening to my eldest son read out the letter gave me a sense of pride, I had tears in my eyes.

“My youngest said it was ok, he did not mind sharing me so I could help look after sick people. The letter made me feel appreciated in such a tough time, like I was really making a difference.”

Lorraine Quinlan, who works in one of the Service’s 999 control rooms, said: “My son has been so scared and has cried every time I’ve left home to go on shift. Getting this letter has been a massive boost to him – and my daughter.”

Letters have also been sent to grandchildren, cousins, nieces and nephews – any child who has struggled while a loved one has been working.

Chief Operating Officer of London Ambulance Service Khadir Meer said: “The sacrifice that our people and their children have made during the COVID-19 pandemic has been nothing short of extraordinary.

“I am incredibly indebted to our team for everything they have done and continue to do to care for Londoners. With my own son receiving a letter from the Chief Executive, I know only too well the power of this kind of letter written personally to your child in helping them understand the role their parents have played in tackling this crisis.”