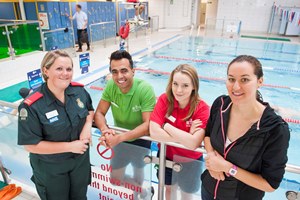 Over 30 lives have been saved since the launch of a London Ambulance Service campaign to put more public access defibrillators in the capital.

A total of 1,007 defibrillators – which are used to restart someone’s heart when they’re in cardiac arrest – have been established in shops, businesses and gyms across London during the year-long Shockingly Easy campaign.

The achievement is being marked at an event at 9am this Wednesday 15 July at the National Maritime Museum where there will be an opportunity to hear the stories of two cardiac arrest patients who have recently been saved by a public access defibrillator. They will also be reunited, for the first time, with one of the paramedics who helped to save their life.

Thirty two year old Natasha Weisz, a doctor from Finchley, was swimming in the fast lane at Finchley Lido in May when she suddenly stopped, slumped against the ropes and went into cardiac arrest. Natasha was pulled out of the water and resuscitated by three lifeguards who gave her CPR and three defibrillator shocks before the ambulance crew arrived and took over.

Brent Advanced Paramedic, Chelsey Pike, who was part of the ambulance response said: “If it hadn’t been for the lifeguards who promptly recognised that she was in cardiac arrest and immediately treated her, it’s unlikely that she’d be alive today. The lifeguards were excellent.”

Kevin Brewer, 39 at the time of the incident, was completely fit and healthy with no history of heart disease, when, without warning, he suddenly collapsed and went into cardiac arrest whilst working as a maintenance technician at Chessington World of Adventures.

Kevin said: “I was called to a room at the park’s Safari hotel to assist my manager on a plumbing job and as I entered the bathroom everything went blank. I woke up in hospital one and a half days later.”

Robert Wright, the park’s Hotel General Manager and one of the first aiders who responded to Kevin said: “Kevin’s manager raised the alarm straight away and within a couple of minutes six first aiders responded to the call and gave Kevin emergency CPR and three shocks from a defibrillator to keep him alive until the London Ambulance Service arrived.”

“He are delighted that there are an extra 1,007 defibrillators in London ready for members of the public to use in the event of a cardiac arrest.

“When someone has a cardiac arrest, the quicker they receive treatment, the more likely they are to survive. Calling 999, starting CPR and using a defibrillator as quickly as possible is the best way for the public to help save a life in London.

Over the course of the campaign, at least 31 lives have been saved by a public access defibrillator in London and we’re awaiting the outcome of a further 23 patients whose lives may also have been saved. This exceeds the previous maximum number of 18 lives saved in a year.

For more information on how to get a defibrillator for your business and training on how to use it call the London Ambulance Service on 020 7783 2366 or go to www.londonambulance.nhs.uk/shockinglyeasy