A London Ambulance Service awards ceremony has recognised the contribution that members of the public make to saving lives in the capital. 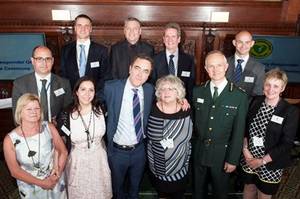 At the Saving Lives 2015 Awards held at the Houses of Parliament on Friday (5 June) 29 volunteers were nominated for their contribution to making London a safer place.

Seven awards were presented altogether by actor James Nesbitt. Amongst the winners was 52 year old administrator Teresa Mitchell, who was working as a school receptionist on 5 December 2014 when two pupils told her a 15 year old boy had collapsed on the classroom floor and wasn’t breathing.

His heart had stopped beating, so Teresa began CPR and asked her colleague to get the school’s defibrillator, a machine that can shock the heart to restart it when it’s stopped beating, and gave the boy two shocks and carried on delivering CPR until the ambulance crew arrived.

“Teresa’s actions undoubtedly helped to save the boy’s life. And she managed to achieve this in front of the boy’s mother, Michelle Todd, who is a teacher at the school.”

Following the incident the boy received a heart transplant and is now recovering at home.

Teresa said: “He was only 15 and we were stunned that something was wrong with his heart. He had a test a couple of months previously that showed he had no cardiac abnormalities. It just shows that anyone at anytime can suffer from cardiac arrest, even fit and healthy young people with no history of heart disease.

“You need to be prepared for something like this. If there wasn’t a defibrillator in the school and if I hadn’t received emergency life support training, I doubt he would have survived. I urge everyone to get trained. It’s a lot easier than you think to save someone’s life.”

A range of organisations were also recognised at the awards ceremony, including Royal Museums Greenwich, who have installed a defibrillator at each of their five public sites, including the main museum and the Cutty Sark. The museum has approximately 90 first aiders and all of them have been trained to deliver CPR and use a defibrillator.  Recently, two members of the team helped to save someone’s life in Greenwich Park when a 62 year old man collapsed and stopped breathing. They quickly gave him lifesaving CPR and shocked him once with a defibrillator, enabling him to start breathing again before the ambulance crew arrived.

Chris Hartley-Sharpe added: “Our volunteers are playing an increasingly important role in helping us to save lives in the capital. The award ceremony was an opportunity to recognise their incredible contribution and to thank them for their hard work and commitment.  We hope that their example will inspire more people to volunteer for the London Ambulance Service.”

If you or your organisation are interested in learning emergency life support skills or becoming a voluntary responder on behalf of the London Ambulance Service please call 020 7783 2534 or visit our Voluntary Responder Group page.

There were seven award categories in total. A description of each category and the winning nomination in each category is detailed below: