A Ricksmanworth man who pulled an unconscious man from a canal has been awarded for his bravery by London Ambulance Service. 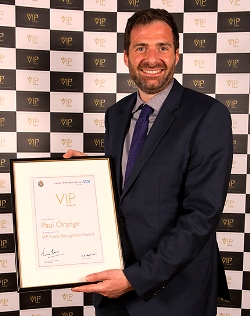 Paul Orange, 42, was commended by London Ambulance Service Chairman Richard Hunt MBE for his quick-thinking and courageous actions which saved a man’s life at the Service’s inaugural awards ceremony in Westminster.

Paul didn’t know he would save a life on Thursday 18 September 2014 when he set off for a jog around 7am on the Grand Union Canal towpath in the North London suburb.

He said: “I was just running along the canal and saw something in the water, which at first I thought was a bit of rubbish.

“Once I realised it was not and it was a chap lying face down in the water and unconscious, I started to dial the emergency services and while I was doing this, a schoolboy on his way to school spoke to the call-taker.

“While he was doing that, I climbed into the canal and got the guy’s head above the water.” 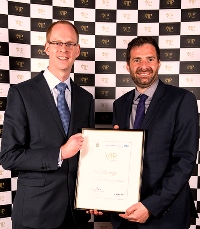 He added: “Paul stayed with the patient until help arrived and informed the emergency services of what happened.  The patient was so seriously ill he required sedation and it was a significant distance down the tow path with no vehicular access making this quite a difficult job.”

The patient was taken as a priority to St Mary’s Hospital, Paddington, and was discharged a week later.