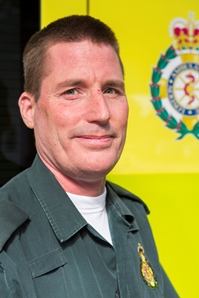 A St Helier-based paramedic, who helped introduce a revolutionary mobile app to dispatch London’s Air Ambulance to patients, has been recognised for his work.

London Ambulance Service Clinical Team Leader Jason Morris, 41, worked with air ambulance colleagues to introduce the app, which cuts the time it takes for the advanced trauma team to be dispatched via air or road by up to two minutes. In some cases doctors and paramedics are dispatched in rapid response cars to trauma incidents in less than 10 seconds.

The father-of-two, who lives in Carshalton and works at St Helier ambulance station, said: “I feel really honoured to get an award and be nominated by colleagues, but there are many people doing great work across the Service every day so I don’t think I’m unique. The app was a result of a team of people who worked very hard to bring it to life over 18 months.”

Jason – who has been with the Service for 16 years – has done several secondments working with the London’s Air Ambulance charity over the last five years, treating critically injured patients across the capital.

Graham Hodgkin, Chief Executive Officer, London’s’ Air Ambulance said: “During the development of the app, Jason was a vital link between the London Ambulance Service and London’s Air Ambulance and made sure the systems in the control room fitted together and worked well. He dedicated a lot of his own time to this project and I’m delighted he’s been recognised.”

In addition to his contribution to the app, Jason’s 12 nominations were also for the support and advice he gives to his staff, often coming in on his days off to help them. He was also thanked for working with different agencies to help patients who call the ambulance service on a regular basis and need specific help.

Jason added: “Every job has its ups and downs but I really enjoy what I do – as far as I’m concerned it’s the best job in the world.”