Ambulance workers from London’s ambulance service are stepping up the pace ahead of this year’s Virgin London Marathon (Sunday 26 April) aiming to raise hundreds of pounds for the Ben Kinsella Trust, to help tackle knife crime.

The team will be taking on the gruelling 26.2 mile challenge to raise awareness of violent crime, a problem that the Service is all too aware of. 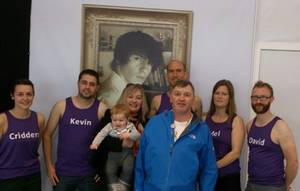 Deborah Kinsella, the mother of Ben Kinsella, who was stabbed to death in 2008, said: “We are completely amazed and grateful that the paramedics and Service staff from London Ambulance Service are running the marathon to help raise money in Ben’s memory. Without their help we can’t continue to educate young people about the consequences of knife crime or make London safer.

“I would urge runners, viewers and spectators to remember that thousands of people are affected by knife crime every year. I wish them the best of luck!”

The team of 20 will join over 35,000 entrants taking part in the world famous event running from Greenwich through to East London, past Canary Wharf and the Embankment, onto the finish line in St James’ Park.

In 2014 16 Service staff raised £7,405 for the Ben Kinsella Trust, which went towards providing information to young people about the impact of knife crime.

To support the team in their efforts to raise funds for the Ben Kinsella Trust, sponsor them now by visiting http://uk.virginmoneygiving.com/fundraiser-web/fundraiser/showFundraiserProfilePage.action?userUrl=LASLondonMarathon2015&isTeam=true