London Ambulance Service staff at Victoria station today (5 February) showed over 90 passengers how to save a life in five minutes.

Paramedics gave demonstrations of how to perform CPR and use a defibrillator, a machine that can shock the heart to restart it when it’s in cardiac arrest. 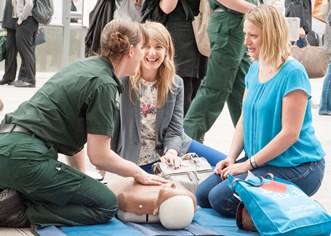 Ambulance Operations Manager Chris Hartley-Sharpe said: “There are over 10,000 cardiac arrests in London every year. When you have a cardiac arrest your heart stops, blood is no longer being pumped around the body and you are clinically dead. The quicker that CPR and defibrillation is given to a patient, the greater their chance of survival.”

As London’s second busiest transport hub, there is a high risk that one of the millions of passengers that pass through the station each year may have a cardiac arrest and require emergency treatment by a member of the public or station staff.

Fiona Stoten, 52, a civil servant working for the Metropolitan Police was shocked back to life by one of Victoria’s public access defibrillators when she had a cardiac arrest at the station in September 2013.

Fiona, who was travelling home to Kent after finishing work, received prompt CPR and defibrillation from two members of the public who recognised the signs and symptoms of cardiac arrest when she suddenly collapsed and turned grey.

Paramedic Hassan Shakir, who was part of the London Ambulance crew who arrived on scene within four minutes, said: “When we arrived on scene, Fiona had already received CPR and defibrillation from two police officers. This undoubtedly helped to keep her alive until we were able to reach to her and take over.”

There are a total of nine defibrillators at London Victoria station. If you suspect that someone is having a cardiac arrest at the station or at any other station in London, please call 999 and notify a member of staff immediately who will locate the nearest defibrillator.

The event was part of the London Ambulance Service’s Shockingly Easy campaign to get an extra 1,000 defibrillators into the capital within a year.

There are over 2,700 locations in London with at least one defibrillator and you should also be able to find them in tube stations, museums and gyms.

For more information on how to get a defibrillator for your organisation and training on how to use it call the Shockingly Easy campaign on 020 7783 2366 or go to www.londonambulance.nhs.uk/shockinglyeasy