London’s ambulance workers prepare for busiest night of the year

New Year’s Eve is expected to be an exceptionally busy night and the London Ambulance Service is asking revellers to drink sensibly and only call for an ambulance in a genuine emergency.

At peak times last year the Service was taking over 600 calls an hour when normally it would only take around 250. 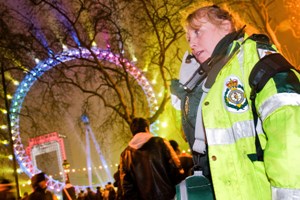 Deputy Director of Operations Kevin Brown, who is leading the Service’s response on New Year’s Eve, said: “It will be an extremely busy night for us across the capital with our call takers answering hundreds more emergency calls than usual and our medics out in teams on the streets, working with colleagues from St John Ambulance, to help those at the central London celebrations.”

The Service is running three alcohol recovery centres and five booze buses across London to look after people who have had too much to drink.

To help respond to anyone who becomes unwell or injured in the event area, we are working with St John Ambulance volunteers to run 11 treatment centres. Medics in the event area will work in teams of three with St John Ambulance volunteers on foot, carrying full medical equipment with them, including a defibrillator, oxygen and a carry sheet to use as a stretcher. They will be able to weave in and out of the crowds where it is too busy to take an ambulance.

Katherine Eaton, Events Manager for London St John Ambulance, said: “If you need medical help make your way, if you can, to one of our treatment centres. In an emergency ask for help – or get a friend or passer-by to do it for you – from a steward, security official, first aid volunteer or police officer. Only dial for an ambulance as a last resort.”

Kevin added: “Many of the people we’re called to on New Year’s Eve have injured themselves or become unwell because they’ve had too much to drink. This puts additional strain on us and means our ambulances may not be available for those in life-threatening conditions.

“Our New Year’s message to Londoners is enjoy the celebrations but please think before calling for an ambulance and where possible consider using other services such as calling NHS 111, using a pharmacy, or walk-in centre.”

How you can have a safe night out