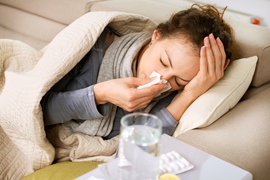 The campaign, ‘feeling under the weather’ has been launched to encourage people, particularly older people and those with existing respiratory conditions, to nip health problems in the bud by seeking early advice from their local pharmacist.  It will run for six weeks.

Every year the London Ambulance Service sees an increase in calls during the colder months.  Those with existing respiratory conditions, such as asthma or bronchitis are particularly vulnerable, and for frailer and older people, even the common cold can become more serious.

To read more about the ‘Feeling under the weather’ campaign please visit the NHS website.