A 28-year-old was reunited with the London Ambulance Service paramedics who saved his life after his heart stopped beating during a football game in Tooting.

Paul Cowling thanked the paramedics, police officer and members of the public who came to his aid when he suffered a cardiac arrest during a Sunday morning football friendly in November last year.

The Stockwell man said: “All I remember is going to bed on Saturday night and waking up on Tuesday in a hospital. 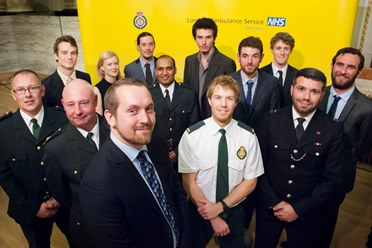 “I’m very fortunate that two of my friends, a chef and a teacher, had a high level of training in first aid and kept me alive until the ambulance arrived.

“I feel as if I have a massive debt to everyone who saved my life and, in a way, I find it hard to think about because I’m not sure how I can pay them back.”

Paramedics Rob Morgan, Mubashar Ahmad and Tom Gilbert, and Duty Officer Mark Hosking were reunited with Paul at the ceremony in Westminster after they spent an hour and fifteen minutes trying to resuscitate him and shocked him with a defibrillator 15 times.

Mubashar said: “We were very focussed and committed and we knew we had to get Paul back and we worked harder and harder as the time went on. It was a combination of everything including great team work and also some luck on Paul’s part that resulted in such an amazing outcome.

He added: “It was the most rewarding job I have ever done in my life. Since it happened I have been thinking about it a lot and it makes me feel very proud to be a paramedic and to work for the London Ambulance Service.”

They all received a commendation from London Ambulance Service Chief Executive Ann Radmore.

It’s safe to say no-one could have expected Paul, a young professional who now works for an international healthcare charity, would suddenly slump to the floor during his weekly football game on Tooting Common in south London last November.

His team-mates, realising Paul was seriously unwell, dialled for an ambulance and started cardiopulmonary resuscitation (CPR).

Once the paramedics stabilised Paul, he was taken to St George’s Hospital, where he remained unconscious for a number of days until he eventually came around.

He had an internal defibrillator fitted and has been recovering ever since, but thankfully he felt well enough to fly to Hong Kong in March for a well-deserved holiday.

Paul added: “I got back to playing football on Sundays as soon as I could but I’m taking a break at the moment until I feel more up to it, but my friends are still playing. Hopefully I’ll be back on the pitch soon.”