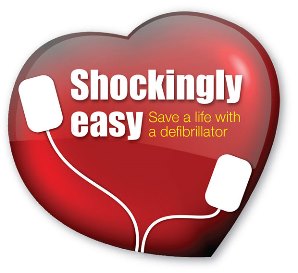 London Ambulance Service is today (1 May) launching a campaign to get 1,000 extra defibrillators in shops, businesses and gyms across the capital to save more lives.

The campaign is being launched with Marks & Spencer which is fitting defibrillators in its 86 London stores.

Ex-footballer Fabrice Muamba, who was famously shocked back to life with a defibrillator after going into cardiac arrest during a football match, is attending the launch event and lending his support to the campaign.

London Ambulance Service Chairman Richard Hunt CBE, said: “If you have a cardiac arrest, your heart stops beating and you are clinically dead. Every second counts which is why we want more defibrillators in public places to help us save more lives in London.”

Around 28 per cent of people survive a cardiac arrest in a public place, but where there is a defibrillator and someone trained to use it, the chance of survival can increase to 80 per cent.

Fabrice said: “If it wasn’t for a defibrillator I wouldn’t be here today.

“I was lucky I had my cardiac arrest in the right place with the best medics around to help me. I want everyone who goes into cardiac arrest to have the same chance as me and that’s why I’m supporting the London Ambulance Service campaign to get more defibrillators in public places.”

By placing defibrillators in public places and training people to use them as well as carrying out CPR, more lives could be saved.

Keith Davis, Fire, Health and Safety Manager at Marks & Spencer, said: “Our position at the heart of community high streets and large footfall shopping destinations means that our stores are perfect venues to host defibrillators.They save lives and we know that having one in every London store will save a life in an M&S store in the future.

“We’re training over 1,000 first aiders to use them in our stores and with the support of the London Ambulance Service we are making shopping in London safer than ever before.”

M&S will roll out the defibrillators across London and its partner Ashbury Training will train over 1,000 customer assistants over the next three months.

Defibrillators can be used by members of the public and they are safe and shockingly easy to use with training.

Richard said: “Don’t leave it too late to do the right thing. Every shop, gym, hotel and office in London should have a defibrillator so they’re ready to save a life in London.

For more information on how to get a defibrillator for your business and training on how to use it call on 020 7783 2366 or go to www.londonambulance.nhs.uk/shockinglyeasy