London Ambulance Service saw a 21 per cent drop in calls across the capital compared to last year but attended a similar number of seriously ill and injured patients during New Year’s Eve celebrations.

At peak times, emergency call takers were answering around 450 calls an hour, compared to over 600 last year. And there were 40 per cent less incidents in the central London event area compared to last year. 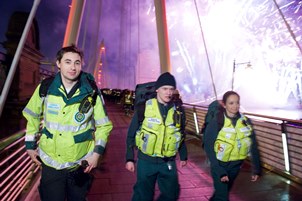 But, between midnight and 5am, ambulance crews attended 568 Category A patients – the most seriously ill and injured people. This compared to 589 last year.

Deputy Director of Operations Kevin Brown, who led the Service’s response on New Year’s Eve, said: “It has been an incredibly busy night for us, as we normally only receive around 250 calls an hour.”

To help manage the increased demand, the Service worked with St John Ambulance to run 11 treatment centres in central London where staff treated 195 patients and took 64 to hospital up until 5am.

Most of the patients in the centres had alcohol-related illnesses or injuries. Many were helped to sober up and treated for minor injuries before being discharged.

In the busy central London area medics worked on foot in teams of three with St John Ambulance volunteers, carrying full medical equipment with them.

Kevin added: “Every year we work closely with St John Ambulance at temporary treatment centres to ensure people out celebrating receive the most appropriate medical care as quickly as possible. By caring for people in treatment centres we can avoid taking them to busy A&E departments.”

New Year’s Day is also expected to be busy for the Service. Kevin said: “Many Londoners will be waking up feeling unwell after a heavy night. We would encourage them to consider using other healthcare services such as walk-in centres or calling NHS 111 for health advice to ensure our medics are free and able to respond to the patients in serious and life-threatening conditions.”

The Service’s control room usually takes an average of 250 calls an hour. The breakdown of calls per hour was as follows:

For more information about this news release please contact the communications team on 020 7783 2286.