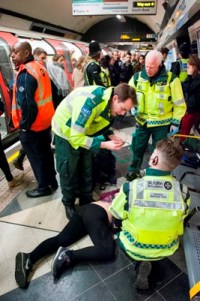 As thousands of revellers across the capital welcomed in the New Year, London Ambulance Service had an exceptionally busy night taking over 600 emergency calls an hour at its peak.

Control room staff answered a total of 2,588 emergency calls between midnight and 5am when normally they’d only respond to around 180 an hour.

Much of the increased demand was due to people becoming unwell because they’d had too much to drink.

Assistant Director of Operations, Katy Millard, who led the Service’s response on New Year’s Eve, said: “It’s the busiest night of the year for us and unfortunately not everyone was using us wisely. Many of our medics were tied up helping people with drink related illnesses and injuries – preventing them from responding to other patients.”

To help manage the increased demand, the Service worked with St John Ambulance to run 13 treatment centres in central London where staff treated 438 patients and took 88 to hospital.
Most of the patients in the centres had alcohol-related illnesses or injuries. Many were helped to sober up and treated for minor injuries before being discharged.

In the busy central London area medics worked on foot in teams of three – a paramedic, technician and St John Ambulance volunteer – carrying full medical equipment with them.
Katy said: “Every year we work closely with St John Ambulance at temporary treatment centres to ensure people out celebrating receive the most appropriate medical care as quickly as possible. By caring for people in treatment centres we can avoid taking them to busy A&E departments.”

While it’s been a busy night the Service is concerned it  may also be a busy New Year’s Day. Katy said: “Many Londoners will be waking up feeling unwell after a heavy night. We would encourage them to consider using other NHS Services such as pharmacies or walk-in centers or call 111 for health advice.”