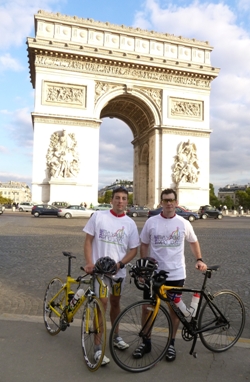 Starting on Monday (7 October) Ben and his friend hoped to complete their journey in 48 hours but managed it in almost half that and raised nearly £1,000 for charity.

Ben said: “Most people complete the route in three days, but we wanted to push ourselves.

“We had so much fun and really enjoyed it. We just kept going and managed to complete it in almost half that time.”

The two hope to raise £1,500 for the Maypole Project, a charity supported by the London Ambulance Service, which provides support for children with serious illnesses and their families.

“£750 is enough for the charity to support one child for a year so raising double that would mean we’ve raised enough to support a child each.

“Family means a great deal to both of us that’s why The Maypole Project was such a worthy cause.”

You can help Ben reach the £1,500 mark by visiting www.virginmoneygiving.com/team/2benson2bikes