Coulsdon grandfather helps to mark 65 years of the NHS 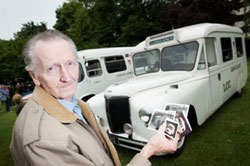 As the NHS celebrates its 65th anniversary today (5 July), an 80-year-old Coulsdon man has recalled the days of working for the ambulance service in the same era.

Pete, in his early twenties at the time, drove a Daimler ambulance (see photo above), which dates from 1948 – the year the NHS was born. They were fitted with a bell, which rang on the way to calls.

The father of three and grandfather of five said: “What I loved about the job from the start was that when you went to work, you didn’t know what you were going to be called to. There was no routine – one day would be quiet and the next you’d go out first thing and not get back until the end of the shift and you might go to nasty accidents or something more minor.

“One incident that sticks out in my mind was a young man who had just been to watch Crystal Palace play and was late for the train. He was running to Thornton Heath railway station and fell in front of a train.

“He lost an arm but we got him out and I remember that he and his parents were really grateful – I guess you could say we saved his life.

“You could never get bored working on an ambulance – it wasn’t like doing an office job or delivery round – I couldn’t have imagined doing anything else.”

Pete completed 41 years in the ambulance service before retiring aged 65 in 1998.

London Ambulance Service’s Community Involvement Officer for Croydon, Vicki Hirst, said: “It’s fantastic to meet people like Pete, who dedicated his life to saving others for so many years. Celebrating 65 years of the NHS makes you think about how much the NHS and in particular the ambulance service has changed over the decades.”