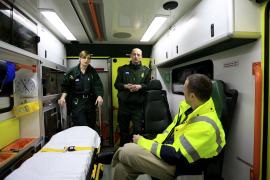 Real-life stories of patients saved from cardiac arrests and heart attacks are featured in a new online film about the London Ambulance Service.

The film was premiered in the US at the EMS Today Conference in Washington, DC yesterday (7 March) to a crowd of emergency medical service professionals at one of the industry’s largest events.

Heart attack patient Paul Le Vesconte, cardiac arrest survivor Steve Hodder and Steve White – who suffered both a heart attack and a cardiac arrest – tell their own stories in the film, alongside cardiologists and London Ambulance Service paramedics who have worked to improve survival rates for people who suffer life-threatening cardiac conditions in London.

Paul Le Vesconte, from Beckenham, said: “The decision that the paramedics had made was absolutely the most important thing and they possibly could have saved my life.”

“We hope that by sharing our experience in London we can help other healthcare systems around the world give their patients the best chance of survival, because ultimately as an ambulance service everything you do has to be in the best interests of the patient.

“We also want people in London to understand how we’re tailoring the care we provide to give emergency cardiac patients the best chances of survival.

“For example, a third of people suffering a cardiac arrest outside of hospital in the capital now survive to be discharged from hospital, compared to around two per cent in the late 1990s.

“We are leading the way in training our staff to recognise heart attacks and take patients directly to specialist centres where a team of expert cardiologists offer the best level of care straight away.”

The filming was underwritten by Physio-Control, a provider of emergency medical response technologies, and a supplier to the London Ambulance Service since 1995.

King’s College Hospital Cardiologist Dr Jonathan Hill, who is interviewed, said: “Speed is vital when responding to heart attacks, this is why it is crucial that patients are treated as quickly as possible.

‘STEMI’ is a term used by emergency healthcare professionals indicating that a patient is experiencing a life-threatening type of heart attack, which can lead to sudden cardiac arrest.  STEMI stands for ST-elevation myocardial infarction.

STEMI patients have the best chance of survival when identified as quickly as possible by ambulance crews and taken directly to a specialist hospital where expert cardiologists can treat them immediately.

The Code STEMI web series examines high-performing regional systems of care that have demonstrated success in improving heart attack and sudden cardiac arrest patient outcomes. The London Ambulance Service story will explore how one of the busiest ambulance services in the world is improving patient outcomes by focusing on the administrators, doctors, paramedics, emergency medical technicians, trainers, dispatchers and the patients themselves – to share their stories.