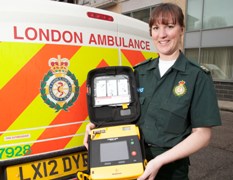 Sam’s role is funded by the British Heart Foundation to coordinate basic life support ‘Heartstart’ lessons in the community.

Sam will also be working with local organisations who want to be involved with helping to save lives by getting their own defibrillator – a machine that delivers a shock to restart someone’s heart when it stops beating. There are over 800 public-access defibrillators in London.

Sam, who previously worked as a paramedic team leader in Croydon, said: “It’s really easy to learn how to save a life and it can make all the difference to someone’s chances of survival if they collapse and stop breathing.

“When a person suffers a cardiac arrest blood is no longer being pumped effectively around their body and oxygen is not reaching their brain. It’s vital that someone calls 999 for an ambulance, starts chest compressions and asks if there’s a defibrillator nearby.