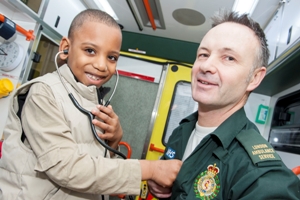 A six-year-old boy whose twin brother died at birth has realised his dream after spending time with paramedics and climbing on board an ambulance.

For the last few years the St Matthias Primary School pupil has been fixated with ambulances and paramedics and cannot wait until he is old enough to train to be one.

Kwame, who also has a 14-year-old brother, said: “I just want to help sick people and babies like I was helped.”

Single parent Hyacinth, 40, said: “He absolutely loved it and it was great that Patrick was able to answer so many of his questions. Kwame is fascinated by ambulances and paramedics to the point of talking about the training he needs, waving to every ambulance, stopping anyone in uniform and watching documentaries. He knows all of the different models of ambulances too.

“It really has made his dream come true. Kwame has had a lot of illnesses over the years, but throughout the whole time, ambulance and hospital staff were fabulous.”

Patrick added: “When Hyacinth got in touch and we heard Kwame’s story and how brave he’s been over the years, we didn’t hesitate to invite him along to see how it all works.