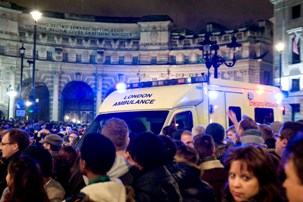 As thousands of revellers across the capital welcomed in the New Year, London Ambulance Service had an exceptionally busy night taking up to 10 emergency calls every minute.

Control room staff answered a total of 2,603 emergency calls between midnight and 5am.

To help manage the increased demand the Service worked with St John Ambulance to run 13 treatment centres in central London where staff treated 506 patients and took 49 to hospital.

Many patients in the centres had alcohol-related injuries. The Service also ran three alternative response vehicles to treat people who had too much to drink or patients with minor injuries. This helped free up regular ambulances to deal with more serious incidents.

Assistant Chief Ambulance Officer John Pooley, who led the Service’s response on New Year’s Eve, said: “Demand on the Service in the early hours was extremely high and a lot of the extra calls were because of alcohol-related injuries. At the busiest point of the night, our staff were taking 638 emergency calls an hour. They would expect to deal with 180 calls an hour on a normal night.”

John said: “We worked closely with St John Ambulance at temporary treatment centres to ensure people out celebrating received the most appropriate medical care as quickly as possible.

“Every year we get busier and busier so our New Year’s message to Londoners is use us wisely in 2013 and only call in an emergency. Consider using other NHS Services such as pharmacies, GP surgeries and walk-in centers or call NHS Direct on 0845 4647 for advice.”