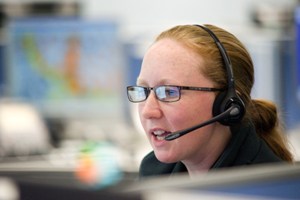 People living in the capital and beyond will get the chance to go behind the scenes of one of the world’s largest and busiest ambulance control rooms when the London Ambulance Service holds a 12 hour ‘tweetathon’ from midday today (4 October).

It will follow an emergency call taker as they answer 999 calls and potentially give life saving advice to some of the 4,000 or more people who call for help every day.

Head of Control Services, Richard Webber, said: “Our staff can deal with anything from helping to deliver a baby to giving instructions on how to resuscitate someone who has stopped breathing.

“Tweeting some of the calls we receive will give Londoners a snapshot of the huge variety of work we deal with as well as taking them through some of the questions we ask, the advice we give and why.”

Not everyone who dials 999 will be sent an ambulance. Callers with less serious illnesses or injuries may be referred to NHS Direct or given clinical advice over the phone.

Richard added: “Anyone with a life-threatening illness or injury will be sent a fast response. But not all 999 calls are an emergency. We hope people will see how busy we are and consider using other health care providers in the community such as a GP, pharmacist or walk in healthcare centres.”

The calls will be captured through the Service’s Twitter page, www.twitter.com/Ldn_Ambulance, under the hashtag #999ambulance. The ‘tweetathon’ will start at midday and finish at midnight.