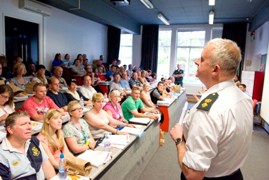 Around 200 frontline ambulance staff from across the country are arriving in the capital today to provide support to London colleagues during the Games.

They will be crewed alongside London Ambulance Service staff to provide medical care in Games venues, as well as liaise between the venues and our control room where we handle 999 calls.

In addition to a four-day Games course already provided by London Ambulance Service trainers, staff from other services are spending two days getting used to the vehicles and equipment they will be using before being deployed to venues from Friday – the day of the Olympic Games Opening Ceremony.

Deputy Director of Operations Jason Killens said: “The London 2012 Games is the biggest event we’ve ever planned for.  We’re expecting an increase of four to five per cent in demand on our service and we’ve asked other NHS ambulance services to provide some staff to help manage this.

“It’s a fantastic opportunity for our colleagues from other services to be involved in this international sporting event.

“Our plans will ensure that there are enough ambulance staff in and around Games venues, but also that we’re able to maintain our service to patients across the rest of London.

“So in addition, we’ll make the best use of our frontline staff, for example, by placing cycle responders and foot teams in busy hotspots such as St Pancras and Stratford train stations. We have postponed training for the Games period, freeing up clinical staff as well as training officers to be out on the road treating patients.

“We’ll also be working closely with voluntary ambulance services at cultural events and will open our event control room to manage our day-to-day response to the Games, which we already do for large-scale events such as the London marathon and Notting Hill Carnival.

Paramedic Pauline Kiely from Yorkshire Ambulance Service said: “We’re all thrilled to be in London and really excited about being involved in the Games. This is probably one of the few events we’ll get to work as a single national service – with representatives from right across the country.

“It’s a once in a lifetime opportunity and I’ve learned a lot of new skills – including providing treatment to Paralympians.”