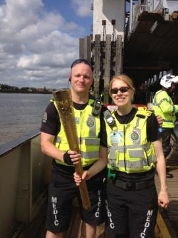 The numbers of two-wheeled medics in London will increase over the next few days to take emergency care to patients quickly through the crowds on the torch relay route and during the Games.

As the Olympic flame made its way through the capital for the first full day yesterday (21 July), 10 cycle medics geared up for the challenge alongside eight ambulance crews on duty on the route.

Two patients were checked over by staff, but neither required hospital treatment.
Around 60 cycle responders, up from the usual 35, will be posted to places with high volumes of pedestrians. The team will cover additional areas such as Stratford, Greenwich, Victoria, the South Bank and along the torch route.

Cycle responders, who have the same lifesaving skills as regular ambulance staff, have already been operating in the West End, City of London, Euston, Kingston and Heathrow Airport for some time.

Assistant Director of Operations Katy Millard said: “We very much look forward to supporting the torch relay this week and are prepared to provide emergency care for the crowds who gather to watch as the flame makes its way around the capital.

“We have posted additional staff in ambulances and on bicycles along the route to treat any patients who need us as quickly as possible.”

As the weather is expected to get warmer over the next few days, spectators along the torch route and visitors to the Games are encouraged to enjoy the sunshine safely.

Katy added: “We want everyone to enjoy the torch relay and the Games in London. Stay healthy during the warm weather by drinking plenty of water, wearing sunscreen and seeking shade during the hottest part of the day.”