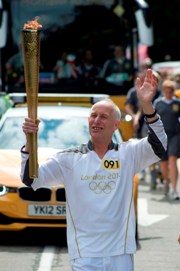 An inspirational ambulance worker who has run over 270 marathons carried the Olympic flame yesterday – a week after having a major operation.

Jim Mundy, 61, who works for the London Ambulance Service taking patients to and from hospital appointments, carried the famous flame through Redhill, Surrey.

He said: “It was an absolute honour and privilege to be a part of the Olympics and part of history. The streets were lined with crowds and everyone was cheering, and waving flags. I felt like a celebrity – a little girl even came up to me and asked if I was famous!

“It was a very different experience to jogging round the park – just to carry the flame meant so much – it was fantastic and I had my five minutes of fame.”

Jim jogged along the route – even though he is still recovering from an operation to remove a tumour on his bladder. He was cheered on by friends, family and fellow club members from Sutton Runners.

Having already completed 277 marathons, when he’s fully recovered, he would like to carry his torch up Mount Olympus, but in the meantime will mount it on the wall in his home.

Jim was nominated by his partner Denise Mundy for being “an inspiration to other runners and for his dedication to the ambulance service’s Patient Transport Service, with his kind attention to all his patients.”