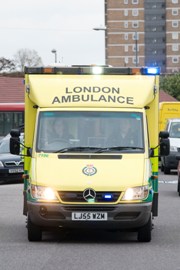 Londoners are being urged to think carefully before dialling 999, after the ambulance service yesterday experienced its busiest ever weekday (22 May).

“Many of these conditions are exacerbated by warmer weather and it may be possible that the sudden change in temperature is having an impact on Londoners.”

As well as critically ill and injured patients, the Service also responded to nearly 4,000 other calls to patients with less serious illnesses and injuries.

As temperatures remain warmer, ambulance chiefs are urging patients with less serious conditions to consider other healthcare options first, so that frontline staff can continue to reach seriously ill and injured patients quickly.

John said: “To ensure that an ambulance is available for those who need us most, as ever, I would urge Londoners with less serious illnesses such as sore throats, skin complaints, earaches or minor injuries – to consider other healthcare providers in the community, for example your local pharmacy or walk-in centre, or calling NHS Direct on 0845 4647.

“We would advise anyone with heart conditions or pre-existing breathing difficulties to make sure they’ve got their medication with them at all times – especially if they’re out and about.

“People should remember that you don’t get seen any quicker by arriving at A&E in an ambulance.”

In warmer temperatures you should: