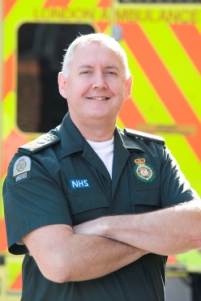 Peter Bradley has today announced that he will be leaving the London Ambulance Service to take up the post of Chief Executive of St John for New Zealand, a role which will include running the ambulance service.

Peter, who has led the Service for 12 years, will continue as Chief Executive until later this year, allowing him to ensure that the Service plays its role in delivering a safe and secure Olympic and Paralympic Games.

He will then move to New Zealand, returning to the organisation where he first embarked on his career with the ambulance service.

Peter said: “I feel really privileged and proud to have led the London Ambulance Service over the last 12 years. It is, in my view, the best capital city ambulance service in the world. More importantly, I’ve seen the care we provide to Londoners improve significantly; more of our most critically ill and injured patients are surviving, and our patients are having their 999 calls answered and responded to quicker than ever. Our highly professional staff are now able to diagnose and treat a wider range of medical conditions, working with the rest of the health service in the capital to ensure patients receive the best possible care for their needs.

“I will be sad to leave, but this opportunity which has come out of the blue brings new and exciting challenges which I’m looking forward to.”

Chairman Richard Hunt said: “The offer of a role in New Zealand as Chief Executive of an organisation where he started his ambulance service career is, of course, a tremendous opportunity for Peter, and one that couldn’t be missed. He will continue with the London Ambulance Service to ensure delivery of the busy summer of events in London, culminating with the Olympics and Paralympics. This will be a fitting conclusion to Peter’s career in the capital.

“Peter has given tremendous service over 12 years as Chief Executive of the London Ambulance Service and has contributed extensively on a wider basis through his role as National Ambulance Director for the Department of Health. We will, of course, lose his committed and dedicated approach at a time of further change across the NHS. He is well respected by all those that work with him, none more so than by his colleagues in the London Ambulance Service. However, he will in due course leave with our very best wishes for future success in a new and challenging role in New Zealand.”

Peter has agreed with the Chairman that he will remain in post until later this year. The recruitment process for his successor will begin in due course.