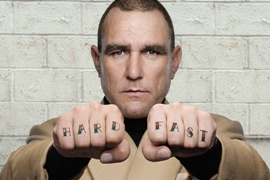 In an advert featuring footballer-turned-actor Vinnie Jones, members of the public are encouraged to call 999 and use chest compressions if they witness a cardiac arrest, but to forget mouth to mouth.

“By carrying out cardiopulmonary resuscitation while an ambulance is on the way you can double someone’s chances of survival from a cardiac arrest, even if you don’t perform mouth to mouth.”

Chris continued: “Thanks to the hard work of our staff more Londoners than ever are surviving an out-of-hospital cardiac arrest, but bystanders only attempt lifesaving intervention before ambulance crews arrive 37 per cent of the time, according to our latest figures.

“Getting a defibrillator, a machine that can restart the heart by delivering an electric shock, to someone quickly if they’re suffering a cardiac arrest will also greatly increase their chances of survival.”

“We now have a team of dedicated paramedics funded by the British Heart Foundation (BHF) who are working in the community to teach people Heartstart, a simple life-saving course.”

To find out more about how you can learn to save a life please contact Antoinette Williamson in our Community Resuscitation team on 020 7783 2534 or email [email protected].

The cardiac arrest survival figure is calculated using the internationally-recognised Utstein method. The calculation takes into account the number of patients discharged alive from hospital who had resuscitation attempted following a cardiac arrest of presumed cardiac aetiology, and who also had their arrest witnessed by a bystander and an initial cardiac rhythm of ventricular fibrillation or ventricular tachycardia.