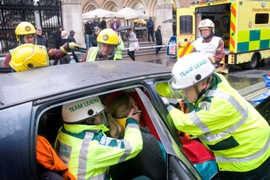 Almost 60 seriously injured patients in London who were expected to die are now alive because they were taken directly to a specialist centre by ambulance crews, according to figures released today.

Since April 2010, London Ambulance Service staff have been taking patients suffering severe injuries from car crashes, falls from height, stabbings and shootings directly to one of four major trauma centres in the capital.

Patients get immediate access to clinical experts around the clock, offering world class assessment and treatment.

Figures released by NHS London in the London Trauma Office annual report show that in the first year, 58 extra patients survived their injuries to leave hospital, compared to the national average.

“London Ambulance Service staff are trained to deliver vital on-the-spot treatment and take the patients that need it most to one of four major trauma centres where they will receive the highest standard of care straight away.

“An extra 58 people are now alive who otherwise would not have been were it not for the trauma networks and we hope to develop this to save even more lives.”

Ambulance staff use a clinical triage tool to decide which patients will benefit most from care at a specialist centre. Around 4,000 patients benefited from being taken to a major trauma centre last year.

The report shows ambulance blue-light journeys from the scene of an incident to one of the specialist centres take an average of 16 minutes.

A coordination desk in the Service’s Waterloo control room monitors the number of patients being taken to each major trauma centre to ensure they will get fast access to clinical experts.

Robert Williamson, 37, is walking again after a lorry ran him over and shattered his pelvis. He was taken straight to the major trauma centre at St George’s Hospital, Tooting. Read Robert’s story.

Daniel Gray, 21, suffered severe brain injuries in a car crash but is on the road to full recovery thanks to immediate care on scene and at the major trauma centre in St Mary’s Hospital, Paddington. Read Daniel’s story.