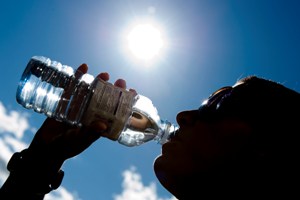 The London Ambulance Service is urging Londoners to look after themselves as hot, sunny weather makes a late return to the capital.

With temperatures hitting 27c, staff in the Service’s control room have seen a 20 per cent increase in 999 calls for people with breathing difficulties.

Assistant Chief Ambulance Officer John Pooley said: “We always see a rise in 999 calls in hot weather and a lot of that is because the heat makes pre-existing conditions like asthma worse, and of course people can get dehydrated from too much sun.”

Across the board, emergency calls were up by 25 per cent yesterday (Thursday 29 September) compared to Thursday last week, and at the busiest times staff were answering over 44 per cent more emergency calls than normal.

John added: “To make sure you don’t become a casualty of the weather make sure you carry any medication with you at all times, avoid the sun at the hottest part of the day and drink plenty of water.

“I’d ask Londoners to help us to respond to the most seriously ill people – like those whose heart has stopped beating or people with serious injuries – by only calling 999 in a genuine emergency.

“As ever, we’ll continue to prioritise our response to these patients, and anyone with a minor condition should call NHS Direct on 0845 46 47, or visit a minor injuries unit, walk-in centre or local pharmacist.”

You can look after yourself in the heat by: