Ambulance staff to give one hour for heroes 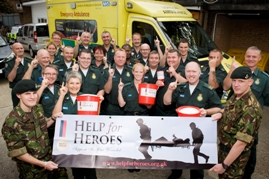 Ambulance services from across the country have launched a campaign to raise money for Help for Heroes ‘give an hour, help a hero’ appeal.

Staff are following a long list of celebrities, politicians and the police, to take part in fundraising for members of the armed forces who have been injured in active service. The appeal will run for three months and staff are encouraged to donate one hour’s pay or to fundraise for 60 minutes.

National Ambulance Director Peter Bradley said: “Many of our staff served in the armed forces before joining the ambulance service and are still going out to war zones as part of the Territorial Army. I’m delighted that services from across the country are coming together to raise as much money as possible for such a worthy cause.”

Paramedic Mark Maslin, who served in the Royal Navy for 11 years, said: “As an ex-military myself and having both of my sons currently in the armed forces, I know the tough job they do in serving our country.

“Many of my colleagues value the important job Help for Heroes does for our servicemen and women and I’m sure they’re happy to give one hour to help the wounded soldiers in their long road to recovery.”