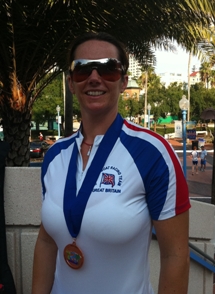 Eleanor Grice, 37, was part of a 22-strong team who travelled to Tampa, Florida earlier this month.

Dragon boat racing has ancient Chinese origins and is thought to date back 2,000 years. It involves a team of up to 20 paddlers, a drummer and a helm to steer the boat.

The GB team competed in a number of events over five days, from 200m sprints to 2,000m endurance races. They took away a bronze medal for the 200m mixed race, with a team made up of 12 men and eight women. They also got a bronze for the 200m open race.

Eleanor, who has been working for the London Ambulance Service for 18 months, said: “The level of competition was amazingly high and racing in such high humidity was energy-sapping, but it was a great experience. I’ve taken part in the European championships, but nothing on this scale before.

“We started training for the world championships in October last year, so were well prepared.”

Eleanor, who was in the navy for eight years, got involved in the sport about five years ago through a neighbour. She is now a member of the Tao Dragons team based at Wraysbury, Berkshire.

She trains up to six times a week, as well as doing regular sessions at the gym. She added: “When I tell people what I do, they’re really surprised and think it looks like great fun – which it is. Everyone seems really interested, probably just because it’s so different. I also think it’s become a lot more popular because there has been a lot of media coverage of Kate Middleton taking part in the sport, most recently on the Royal visit to Canada.”