Members of London Ambulance Service staff are limbering up for the fundraising run of their life in April when they will be taking part in the Virgin London Marathon in aid of MERU. 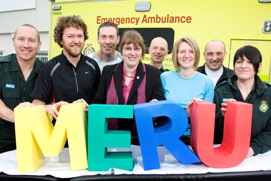 The charity, which is based in Epsom and covers all of London and the South East, designs and manufactures bespoke equipment for children and young adults with disabilities, when there is no other mainstream solution available on the market. The Service is hoping to raise £25,000 over the next two years for the organisation which was chosen by staff as the Chief Executive’s charity.

Chief Executive Peter Bradley said: “The marathon runners are a credit to the Service and I wish them the very best of luck both with the event and their fundraising efforts. We’re looking forward to working with MERU over the next two years and I know that the money raised by our staff will make a real difference to the lives of the children and families that the charity works with.”

MERU Chief Executive Susan Brumpton said: “To be chosen by the London Ambulance Service as its charity is a wonderful opportunity for us. Their efforts are very much appreciated by our staff, our volunteers and the children we help. We wish all the runners every success and will be cheering them on as they take part in the marathon!”

Anybody wishing to sponsor the marathon runners as a group can make a donation by visiting www.justgiving.com/lasmarathon