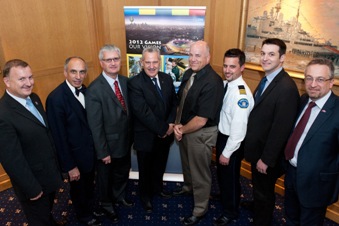 More than 100 people attended the event near the Service’s Waterloo headquarters in May. Guests included colleagues from ambulance services across the country, St John Ambulance and British Red Cross and other healthcare organisations.

The Service’s Head of Olympic Planning Peter Thorpe said: “It’s important to learn from services who have run similar events and share information and this conference was a great opportunity to do this. We started our planning in 2006 – we learned from other cities that have hosted the Games that you can never start planning early enough.

“We are now moving away from the planning phase and into the delivery phase. It’s the biggest sporting event in the world so will be an enormous test, with a huge influx of spectators, athletes, officials and media into London. The challenge is not just providing medical care to the Olympics, but also ensuring that we maintain our normal day-to-day emergency service across the capital at the same time.

“It’s an exciting time and our staff, as well as those from other ambulance services, will have a once in a lifetime opportunity to work at the Games and will acquire new skills along the way.”