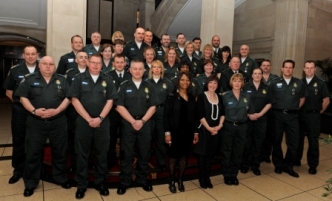 Long-serving members of staff and retirees who clocked up nearly a thousand years’ service in the country’s busiest ambulance service have been recognised at a ceremony.

Twelve retirees from across the organisation, with a combined 405 years with the Service, were presented with glass blocks, bells and a certificate by Chairman Richard Hunt.

Members of frontline and support staff, as well as their families, attended the event in Westminster on 10 March.

Peter said: “I pay tribute to everyone who received an award, whether it be for long service or retirement – it’s a great achievement.

“We shouldn’t forget the important part that partners, family and friends play – they have the important job of listening to the stresses and strains of our staff, who do a very difficult job day in and day out.”