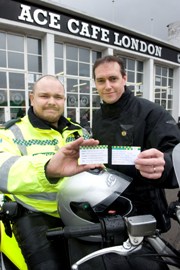 An exciting initiative to help motorcyclists involved in accidents get the aid they need as quickly as possible was launched in London on Monday (17 January).

CRASH cards are now available to bikers across the capital so they can make a note of any personal and medical information and keep it in their helmet.

Bikers then wear a green dot on the helmet so that if they are involved in an accident, ambulance staff treating them can quickly identify any pre-existing medical conditions, as well as other important personal information.

With support from London Ambulance Service and the Ambulance Motorcycle Club the card – the first of its kind anywhere when first introduced in the UK in 2009 – was launched on at London Ace Cafe on the North Circular, Brent.

Motorcycle Paramedic Richard Webb-Stevens said: “By using the CRASH card, motorcyclists are giving themselves the best chance of getting the help they need as quickly as possible if they are involved in an accident.

“Our staff have the skills and training to begin treating a complex range of injuries straight away, and the information contained on the CRASH card can only lead to better care for patients. We encourage every biker to get one.”

Chairman of the Ambulance Motorcycle Club Ian Burrell said: “This card was borne out of experience – it has been designed by serving paramedics who have been on both sides of an accident as the injured rider or attending as medical help.

“If a biker is injured and unable to talk coherently because of concussion or having been knocked out, how does the ambulance crew find out who the patient is, what medication they take, or medical history? What information does the 999 call centre need?

“The card enjoyed a very successful pilot in Essex in May 2009, and for the past 18 months has gained national and international interest as more and more bikers and public bodies get on board this simple but effective approach to casualty reduction.”

London Ambulance Service staff will be giving out free CRASH cards at the London Motorcycle Show at the ExCeL Centre, E16, from 3 to 6 February.

About the CRASH card