Ambulance staff in London deal with their busiest ever night 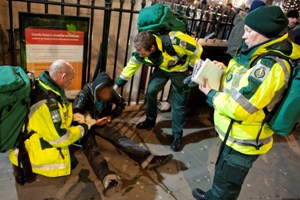 As thousands of revellers across the capital welcomed 2011, London Ambulance Service staff were dealing with their busiest ever night.

Staff in the Service’s control room were taking an average of 11 emergency calls every minute in the hours after midnight – up until 4am they answered a total of 2,639 emergency calls.

The Service had anticipated a surge in demand on what is always the busiest evening of the year and had increased numbers of frontline staff working across the capital.

At London’s celebration hotspots such as Trafalgar Square, Parliament Square, Leicester Square and the banks of the Thames, the Service worked closely with members of St John Ambulance and the British Red Cross.

As in previous years, the Service had expected a high number of alcohol-related incidents and operated alternative response vehicles, or ‘booze buses’, to deal with patients who were simply drunk. A number of medical teams on foot were also able to treat patients for minor injuries, helping to keep frontline ambulances free to deal with life-threatening emergencies.

Deputy Director of Operations Jason Killens, who led the Service’s response on New Year’s Eve, said: “Demand on the Service in the early hours was extremely high and a lot of that extra demand was because of alcohol-related calls and inappropriate use of the Service – people shouldn’t be calling 999 simply because they’re drunk.

“We had to prioritise calls to make sure the most seriously ill and injured patients got help as quickly as possible – that meant more patients than normal with minor illnesses and injuries were given advice over the telephone rather than automatically being sent an ambulance.

“Throughout the night we used extra resources, such as alternative response vehicles or ‘booze buses’, as well as staff on foot with medical equipment. We’ve also been working closely with St John Ambulance at temporary treatment centres meaning we were able to ensure that people out celebrating in the centre of London received the most appropriate medical care as quickly as possible.

“I’d like to thank all of our frontline staff who have been working extremely hard to care for patients on an exceptionally busy night, and the people in our control room who have been dealing with an unprecedented number of calls.

“At the busiest point of the night, our staff were taking 800 emergency calls an hour – that’s an increase of 400 per cent on what they would expect to deal with on a normal night.”

The Service’s control room usually takes an average of 180 calls an hour. The breakdown of calls per hour is displayed in the following table: