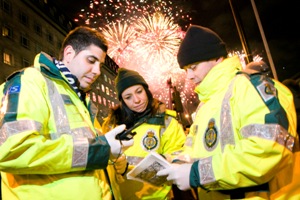 With New Year’s Eve just hours away, ambulance staff are preparing for one of their busiest nights of the year.

Hundreds of thousands of revellers are expected in the capital to welcome 2011 and that means a huge surge in 999 calls for the London Ambulance Service.

Deputy Director of Operations Jason Killens said: “Our staff in the control room and those on ambulances always work hard to look after Londoners. On New Year’s Eve we always see a big increase in 999 calls and as ever we are well-prepared.

“However, I’d urge people to wrap up warm and plan their journey home in advance if they’re out celebrating the New Year and drinking in and around central London. And people should try to drink responsibly and pace themselves – we want people to have a good time, but over doing it can damage your health and lead to other associated injuries.

“Alcohol-related calls put extra pressure on the Service and every minute that we spend looking after somebody who is simply drunk, is a minute that could have been spent helping a patient who is seriously ill or injured. Please enjoy yourself but do it sensibly – a night out shouldn’t end up in the back of an ambulance or in an A&E department.”

To help deal with the increase in demand on New Year’s Eve, the Service is running a number of initiatives, particularly in relation to alcohol-related calls:

Jason added: “We are doing all that we can to ensure our normal level of service is maintained throughout New Year’s Eve but we would ask the public to help us by using their ambulance service wisely.

“Dialling 999 just because you or a friend is drunk is not appropriate. Our priority is to attend patients with life-threatening or serious illnesses or injuries, the elderly and patients with chronic conditions. People with minor illnesses or injuries should think about using other healthcare options like NHS Direct on 0845 46 47, or their local pharmacist or walk-in centre.

“If people need to go to hospital for non-emergency treatment, they should make their own way there. Arriving by ambulance does not mean you will be seen any quicker.”

There are also a number of things that people can do to help themselves: