Busiest ever week for ambulance service as big freeze returns 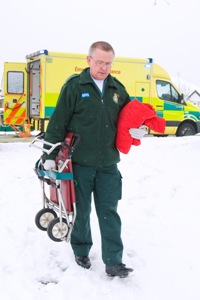 With no sign of an increase in temperatures, Londoners are again being asked to use their ambulance service wisely and only call 999 in an emergency.

Since the snow started to fall on Friday staff took 17,499 calls up until Sunday night – an increase of 30 per cent compared to an average weekend. During peak hours, staff were answering well over 500 calls an hour, or eight every minute.

With forecasters predicting more cold weather and snow, people should take extra care when they’re out and about. The cold can make existing conditions worse, such as asthma, and snow and ice can lead to an increase in slips, trips and falls. Over the weekend staff answered 1,215 calls from people who’d slipped or fallen, up 58 per cent on usual levels.

Director of Operations Richard Webber said: “We’ve been very, very busy since Friday and over the next few days I’d ask Londoners to help us by using the 999 system wisely.

“There are a number of common sense things people can do to look after themselves so they don’t have to call us. If you’re going out wrap up warm, and take care if you’re driving on icy roads or walking on slippery pavements.

“Anyone with minor illnesses or injuries can get help or advice over the phone from NHS Direct on 0845 46 47, or they can visit a local pharmacist, out-of-hours GP service or a walk-in centre. People can also make their own way to A&E – arriving in an ambulance doesn’t mean you’ll get seen any quicker.

“People are calling us with very minor complaints such as sore throats and earache – we’ve even had somebody call us because they had a sore foot after standing on an earring. That could potentially delay our response to somebody in a life-threatening condition or an elderly person who’s fallen on some ice.

“Of course if it is an emergency, please call 999 immediately.”

With the demand on the Service expected to remain high as the cold weather continues over the Christmas period, there are a number of things that people can do to help themselves: