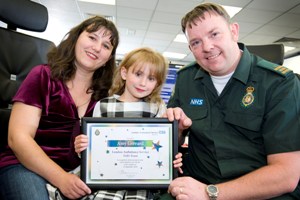 A five-year-old girl who dialled 999 and helped to save her mum’s life has been honoured by the London Ambulance Service.

Amy Gerrard called for an ambulance when mum Katarina collapsed and suffered a seizure at their Mottingham home in September. Amy gave details of what had happened to her mum over the phone as well as her address, and within minutes an ambulance crew was on scene.

Emergency Medical Dispatcher (EMD) Mark Libby, who spoke to Amy on the phone, was so impressed with her actions that he met her again to present her with a certificate. He also gave the excited youngster and her mum a behind-the-scenes look at the Service’s Waterloo control room where call takers handle emergency calls from across the capital.

Mum Katarina said: “I can’t really remember anything about what happened apart from coming round and having people from the ambulance service already there.

“I later found out that Amy had dialled 999 to ask for an ambulance and even given the ambulance crew the phone number of a family friend when they arrived. I’m very, very proud of her.”

Mark said: “Amy’s definitely the youngest caller I’ve had, but she was very calm, knew her address and did exactly as I asked her to.

“Children are often easier to deal with when they dial 999 because they’re unaware of how serious a situation can be. But having said that Amy still did very well indeed and her actions undoubtedly saved her mum’s life.”

Amy added that she was very excited to visit the London Ambulance Service headquarters and now knows exactly what to do in an emergency.