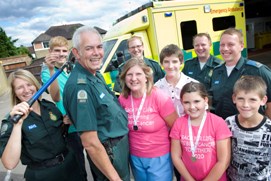 A medic from Kenton had his ponytail cut off to raise cash for Cancer Research after his wife battled the disease.

London Ambulance Service Emergency Medical Technician Paul Worger, was joined by his family and colleagues as the plaited ponytail was chopped off by the person who donated the most money – his crew mate of five years, Paramedic Amy Laws.

Paul, 51, of Greystone Gardens, started growing his ponytail in 2006, after his wife Teresa was diagnosed with breast cancer and could no longer cut the family’s hair.

The father of four, who has worked for the Service for nine years, said: “It got so long that my daughter said I should put it in one of her scrunchies, which I did and it made us all laugh. It was the first time we had all smiled in weeks.

“When I went back to work it was a real talking point among patients, who always recognised me because of the ponytail.”

Teresa, 50, who works for Meadow House Hospice in Ealing as a palliative care specialist, went through chemotherapy, reconstructive surgery and radiotherapy. This month she and their 10-year-old daughter Rebecca entered the Race for Life. Together, the family has raised over £400 for Cancer Research.

Paul, who is based at Pinner ambulance station, added: “Teresa had a newly approved drug during her chemotherapy and without that she might not be here today. This is why we wanted to raise money so that Cancer Research can continue its important work. I’m really grateful to my managers for their support and to all of my colleagues and friends who have been really generous.

“The end of the ponytail signals a new start for us.”